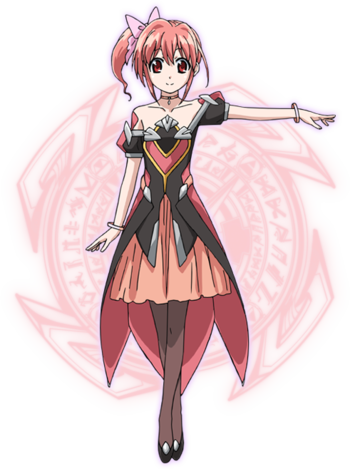 Voiced by: Yōko Hikasa
An Artificial Human originally created by Eltria's Planet Reclamation Committee. Masquerading herself as an A.I. she manipulated Kyrie from the time she was a child
Elenoa Florian

Mother of Amitie and Kyrie. She worked with her husband Granz to try and bring life back to the planet Eltria.
Advertisement:

Voiced by: Daisuke Takahashi
Arisa's father. He's friends with Shiro, due to their shared interest in soccer and the friendship between their daughters.
Jodie Bannings

Voiced by: Hiroshi Kōsaka
The father of Suzuka and Shinobu. He and his wife run Tsukimura Heavy Industries and Tsukimura Constructions.
Haruna Tsukimura

Voiced by: Naomi Sano
The mother of Suzuka and Shinobu. She and her husband run Tsukimura Heavy Industries and Tsukimura Constructions.
Advertisement:
Misato Mikami

Sister of Shiro and aunt of the Takamachi siblings. She may or may not be Miyuki's biological mother.