Voiced by: Kaori Mizuhashi in Japanese, Marianne Miller in English 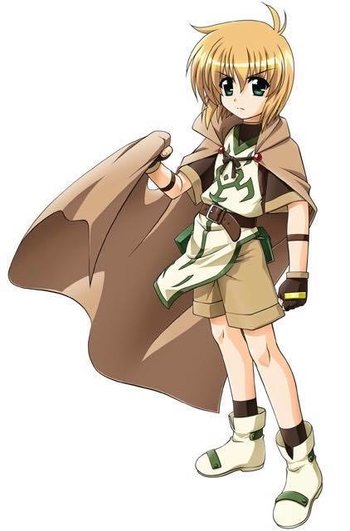 "Nanoha told me: 'He's my magic teacher who is also the legendary Chief Librarian who manages to organize and maintain the Infinite Library. My most admirable friend. Moreover, long a ago a very cute ferret...'" [...] "Weren't you a ferret that evolved into a real human?"
— Chrono, Magical Girl Lyrical Nanoha The Movie 1st Sound Stage Side F, Track 4: "Claudia - Yuuno and Chrono"

Though the viewer gets to see him introduced first as a human mage, he's been badly injured and assumes the form of a ferret to better heal and recover. This is how Nanoha finds him, and he doesn't end up revealing his human form to her until halfway into the first season (not that he meant to keep it secret, it simply slipped his mind that he hadn't actually told her). In any case, Yuuno is looking for twenty one Jewel Seeds. Being unable and unsuited to use the Intelligent Device, Raising Heart, he gave it to Nanoha, with whom it is remarkably compatible. Yuuno assists Nanoha in most of her adventures during Season One, acting as a cross between a mentor and The Lancer (of the rare gentle-and-sweet variety).

The second season sees Yuuno having less action time, and more relegated to the backseat. However, his presence is still crucial as he helps in the battles against the Wolkenritter and the season's Big Bad. His research in the Infinite Library also provides crucial information about both.

The third season has him effectively Put on a Bus — he only appears in three cameos in StrikerS, and at least once in ViVid so far... and not at all in Force. He has settled down as the Chief Librarian of the Infinite Library, in the same organization as his friends.

Voiced by: Natsuko Kuwatani in the Japanese version and Lauren Landa in the English version. 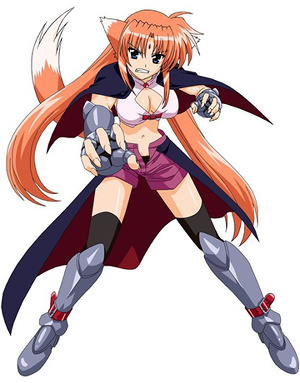 Fate's familiar, who accompanies her on her quest to find the Jewel Seeds. Arf was a wolf cub abandoned by her pack due to an illness. Fate found her during her training and saved her life by making her into a familiar.

Arf despises Fate's mother and is only loyal to Fate. Late in the series, when she is injured after attacking Precia over her mistreatment of Fate, she retreats to Earth and seeks help from Nanoha, later helping in the assault on the Garden of Time. She fights alongside the heroes in A's, primarily facing off against Zafira.

In StrikerS, she takes on the form of a small child in order to use as little of Fate's mana as possible and stays behind to do household chores, believing that Fate has become strong enough to fight on her own. She helps the Harlaown family in the household and is the babysitter of Chrono and Amy's children, Karel and Liera. 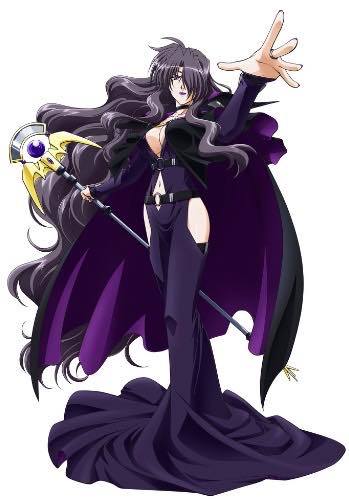 The main antagonist of the original series, who seeks the Jewel Seeds to travel to Al Hazard to resurrect her dead daughter Alicia. Apparently died when she and the capsule containing Alicia's body fell into the trans-dimensional void. 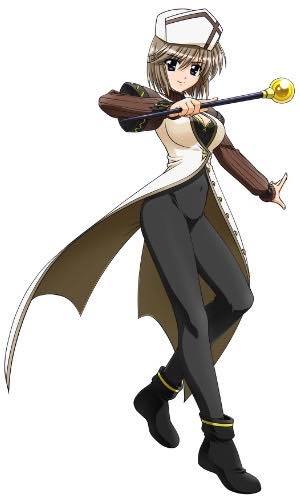 Precia's familiar, who was created to further Fate's education and make Bardiche. Although she cared greatly for Fate, she was unable to go against Precia, even at the end of her life. The records she left behind, however, helped prove Fate's innocence in the Lost Logia case. 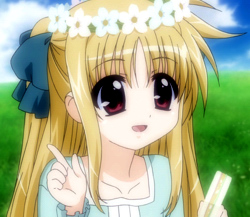 Precia's deceased daughter, for whom Precia went completely nuts, and for whom Fate was cloned as a temporary replacement. Precia sought the lost technology of Al Hazard to resurrect her. If she wasn't already irreversibly dead, she became so when her pod fell into the trans-dimensional void alongside Precia. A false version of her was created in Fate's Lotus-Eater Machine, where she regretted not having met in real life, and offers Fate some encouragement. 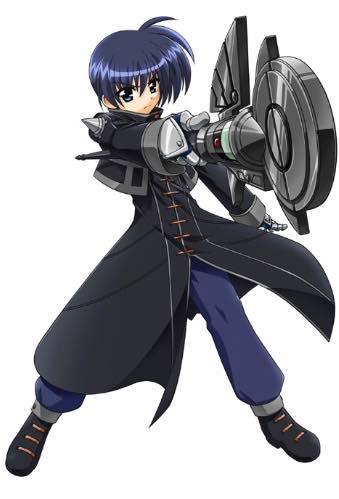 One of the top Enforcers on the Arthra and the son of Captain/Admiral Lindy Harlaown. While not as powerful as Nanoha or Fate, Chrono (initially) has far more experience. Stoic and logical, Chrono prefers to assess a situation and wait for a chance to strike, and he can get somewhat annoyed by Nanoha's impulsive actions. Chrono singlehandedly determines cause of the unusual events in season 2, but hardly appears in season 3.

Currently an admiral himself, he's the captain of the Claudia and is married with Amy and has fraternal twins with her, Karel and Liera. Chrono has yet to appear in ViVid or Force, but he appears in The Movie 1st Sound Stage F and in The Movie 2nd A's audio commentary, both taking place in the ViVid timeline. 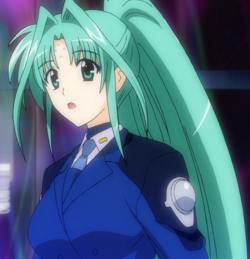 Chrono's mother and The Captain of the Arthra and an admiral. Despite her authority, Lindy is a gentle and easygoing woman, and like Nanoha, would rather talk things out before resorting to force. However, it's implied that she possesses incredible power, suppressing a dimensional tremor by herself. She is responsible for giving Nanoha most of her orders in the original series and A's. She adopts Fate, and serves as the legal guardian for Erio, as Fate was too young to officially do so. 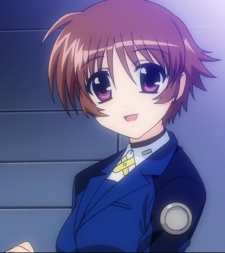 An officer on the Arthra who is relatively playful, in contrast to the highly serious Chrono. Seven years after the Precia Testarossa Incident and the Book of Darkness Incident, she and Chrono marry and she gives birth to fraternal twins, Karel and Liera. Amy has retired from her duty to become a full-time mother.

Allex and Landy are Dimensional Navy officers aboard Arthra.

An officer of the Arthra, who pretented to be Arf's owner to "reclaim" her from Alisa's house. She never appeared in the franchise at all; she's only mentioned once in The Movie 1st audio commentary. 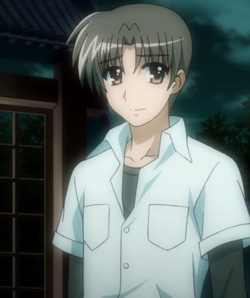 Nanoha's older brother, who is a college student in the first series. He was the hero in Triangle Heart 3, but the only things that carry over are his skill with swords, his relationship with Shinobu and his voice actor, Hikaru Midorikawa. 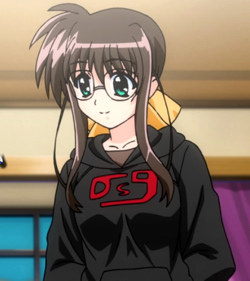 Nanoha's older sister who may or may not be her cousin, as she was Triangle Heart 3: Sweet Songs Forever. A high school student in the original series. She's quite fond of petting Yuuno. 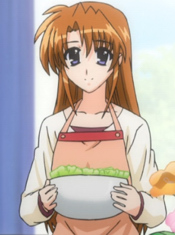 Nanoha's mother, who runs a cafe called the Midori-ya together with her husband Shirou. 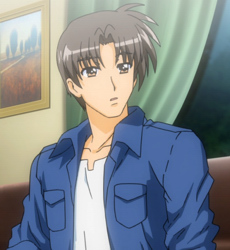 Nanoha's father, who is alive in this version but quit his bodyguard job after being hospitalized for a long time. He owns and works at the Midori-ya cafe, but also coaches a kids soccer team. 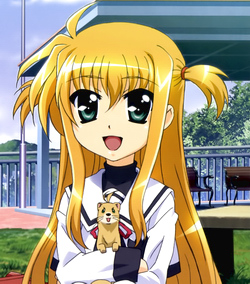 One of Nanoha's schoolfriends. Alisa has the honor of being the first person to be on the receiving end of a Nanoha befriending, when Nanoha hit her for bullying Suzuka. She got better soon, thankfully. In the first season, she saves a wounded Arf who later sees a savior in her. 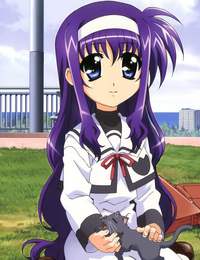 Another of Nanoha's school friends, and the little sister of Kyoya's girlfriend Shinobu. She meets and becomes friends Hayate in A's, and helps introduce Nanoha and Fate to her.

The head maid of the Tsukimura family and Suzuka's personal maid, respectively.

Alisa's butler and chauffeur, who helps her to bring the injured Arf to the Bannings' mansion. 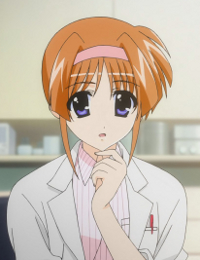 A veterinarian in Uminari City who tends to Yuuno when Nanoha and her friends take him to her.