This is the character page for the characters who are introduced in Magical Girl Lyrical Nanoha A's Portable . 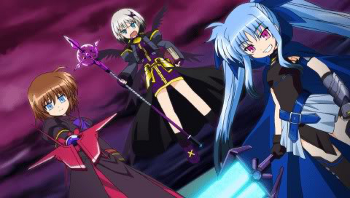 (From left to right) Material-S, Material-D, Material-L. Also known as Stern, Dearche and Levi.
The Materials (マテリアル Materiaru) are programs of the "Eternal Ring" of System Unbreakable Dark (U-D) in the Portable continuity. They, along U-D, were written long time ago in the Ancient Belka, originally used to take possession of the powers of the Book of Darkness, but were sealed by the Book (probably the Defense Program) in return.

The Materials also appear in Reflection and Detonation, playing a similar role to that in Gears of Destiny. 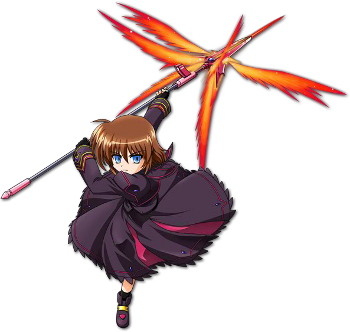 The Material of Wisdom
"This is the most logical approach."

Material-S aka Stern the Destructor is the copy of Nanoha Takamachi with the melee skills of Vita and the defense skills of Zafira. "Lord" Dearche refers her as her right-hand. She's stoic, rational, quiet and polite, but still extremely dangerous. Stern is the Material of Wisdom and is called as the "Exterminator of Starlight".

In B.o.A., Material-S appeared in Nanoha, Fate, Reinforce and Zafira's routes, appearing only in extra stages in the latter two. In G.o.D.'s Story Mode, Stern is the boss in Sequence 02, appears in Sequence 01, 04, 06, and in the Final Sequence, and is playable in Sequence 10. In Sequence X, she's the first opponent. 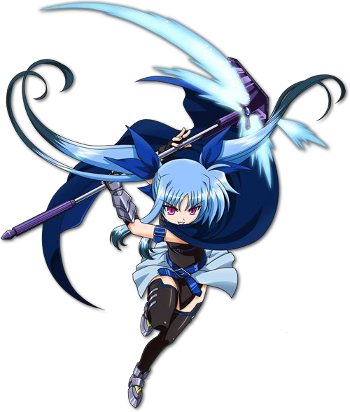 Material-L aka Levi the Slasher is Fate Testarossa's copy with Signum's weapons finesse and long-range defenses and Chrono's extensive Full Drive-enhancement skills. Claims to be Dearche's "left-hand". She's extremely energetic, loud and a Blood Knight, but she's also very childish and not particularly smart. Levi is the Material of Power and she's called the "Thunderblade Assailant".

In B.o.A., Material-L appears in Nanoha, Hayate, Shamal and Zafira's routes, appearing only in an extra stage in the latter. In the former three, she's the first of two Materials, in Shamal's case the only Material but first villain, to be encountered. In G.o.D.'s Story Mode, Levi is the boss in Sequence 03, is the first target in Sequence 06, appears in Sequence 01, 04, 07-R, 08 and in the Final Sequence, and is playable in Sequence 10. In Sequence X, she's the second opponent.

In the first game, Material-L has Fate's moveset and the passive skills of Fate, Signum and Chrono: Fate's Accel Stock Plus and Accel Loader, Signum's Combo Power and Long Range Defense, and Chrono's Drive EX-Critical and Drive EX-Long. In the second game, Levi has stronger moves and spells than Fate and has like her a special form, Sprite Form. Unlike Fate's Sonic Form, the Sprite Form relies more on raw strength than raw speed in close-combat, but is not slower per se. One of Levi's weaknesses is her high mana consumption, especially in her Sprite Form. And like her original, she has below average defense in her Slash Suit and the worst defense in her Sprite Form (tied with Fate's Sonic Form), and her new Full Drive Burst deals 45% basic damage. Her personal passive skill is Long Range Defense Level 3, giving her 15% less damage when being hit by long range moves. 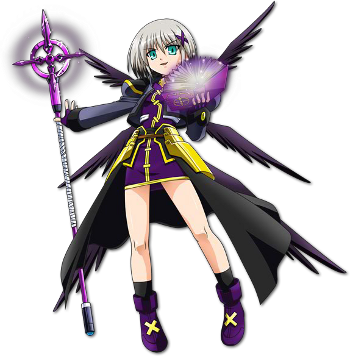 The Material of Lordship
"Abundant power! Overflowing magical power! Breaking the limits, I'M THE KING OF DARKNESS!!"
"KNEEL BEFORE ME!"

Material-D aka "Lord" Dearche is the king of the Materials, the king of the Purple Sky, and the copy of Hayate Yagami with Reinforce Eins' enormous mana output with Shamal's healing and restoration skills. She's very proud, has a very big ego, she's loud and looks down on other people, but she's actually nicer than she acts. Dearche is the Material of Lordship and she's called the "Lord Ruler of Darkness".

In B.o.A., Material-D appears in Hayate, Reinforce, Vita and Zafira's routes, but unlike the other two Materials, all of her appearances are in the main stages and plot relevant. In G.o.D.'s Story Mode, Dearche is the boss in Sequence 01 and sub-boss in Sequence 04, appears in Sequence 06, and is playable in Sequence 10 and in the Final Sequence. In Sequence X, she's the fourth opponent.

In the first game, Material-D has Hayate's moveset and the passive skills of Hayate, Reinforce and Shamal: Hayate's MP Loader and Use MP Cut, Reinforce's MP Gain and Drive Stock Plus, and Shamal's Heal and Drive Loader. In the second game, she is even weaker than Hayate in close range combat, and her Arondight, which is her version of Hayate's Claíomh Solais, is weaker than the said move, but has a high shield break rate, and she has two exclusive moves, Inferno and Ō no Ikō, the former being Awesome, but Impractical, and the latter being a counter spell. Like her original, she has below average defense and her new Full Drive Burst deals 50% basic damage. Her personal passive skill is MP Guard Level 3, having 15% less mana drain while shielding.

She is known as Dearche K. Claudia in Magical Girl Lyrical Nanoha INNOCENT.

Introduced in Gears of Destiny

The father of Amitie and Kyrie, and a professor who works on reviving his home planet Eltria. He invented the Gears and designed them to help stopping the planetary deterioration. Unfortunately, he doesn't have time enough to see any positive results of his work, this fact deeply hurts Kyrie, that's why she decides to use the Time Machine which the professor found and repaired, despite he sealed it away because it's something humanity shouldn't use. 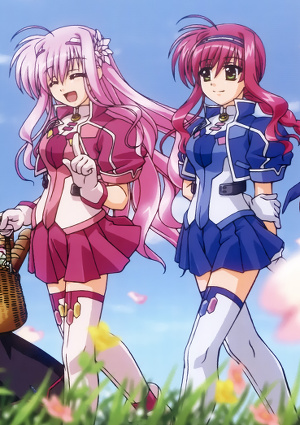 The Gears are people whose duty is to help stopping the planetary deterioration. In fact, they are actually machines created by Granz Florian, and Amitie and Kyrie are special Gears with overdevelopded personality systems. The Florian sisters are also Guardians of Time, who will protect the Destined Fate (not her), as their task is protecting the Time Machine which the professor found, repaired and sealed away.

Both of them also appear in Reflection and Detonation, with similar roles to their game counterparts.

Amitie Florian — The Guardian of Destiny 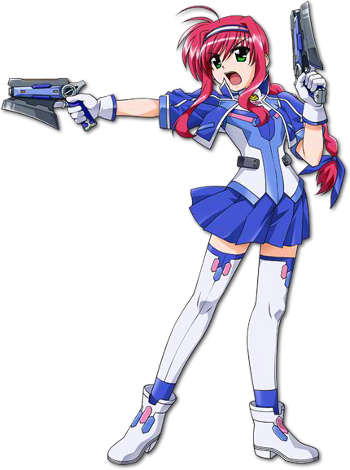 The Guardian of Destiny
"Even if it's difficult, even if it hurts! Moving onwards and looking forward to life! The human heart is made for that! Though my body is made out of steel, I was raised with a kind heart! Living and protecting my family's lives and spirit is the duty of the eldest sister!"

Amitie, also known as Amita, is the older Florian sister. She has a strong sense of duty, is very energetic, speaks very politely, but is also an Idiot Hero. Additionally, she is a lovely older sister and is loyal to her father's teachings, but fails to convince her younger sister to give up using the time machine. As Kyrie travels to the past, Amitie follows her to take her back before she could make any or more problems. She meets the TSAB very soon, but fights them because of misunderstandings and refuse to cooperate with them to prevent more trouble in their timeline, until she's badly injured by U-D and taken care by the TSAB. After Kyrie gets arrested and cooperates with the TSAB, too, both sisters make peace after their final fight. 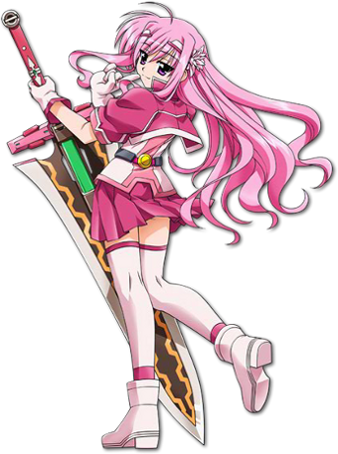 The Right Hand [Operator] of Time
"Once I decide on something, I won't give up and carry it through the end! The professor... And you, Onee-chan, that's what you thought me!"

Kyrie is the younger Florian sister. She talks like a sweet girl, but often mocks others and is very pragmatic and rarely fights fair. However, despite being rebellous, she really loves her family, and she cannot endure the fact that her father will die without any silver of hope to revive Eltria. She researched many timelines with the simulator of the Time Machine to find a way to save the planet. Before she could give up, she found the last hope, the Infinite Linking System, Examia, which only exists in one particular timeline. Therefore, Kyrie uses the time machine to obtain it, causing several incidents in that timeline. She helps the Materials to revive Unbreakable Dark, so "Lord" Dearche could control her, but Kyrie's plan fails. She is later arrested by the Liese Twins and cooperates with the TSAB and has to give up U-D's Examia. Fortunately for her, Yuri and the Materials decide to help reviving Eltria and follow her and Amitie. 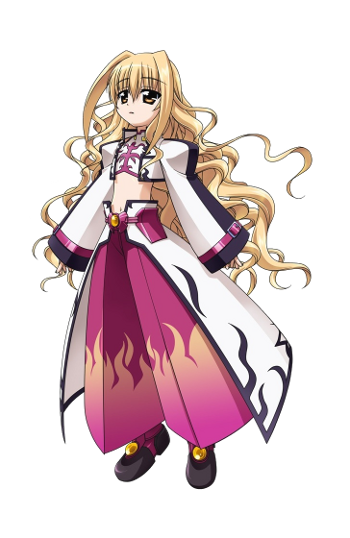 Sovereign of the Purple Sky
"I'm the eternally burning black sun, the shadow that blots out the moon. And therefore, the darkness that can never be destroyed. Only destruction follows my awakening."

In the G.o.D.'s Story Mode, she is the boss in Sequence 04, 05, 10 and in the Final Sequence, becoming stronger in each Sequence. Beating her in all those battles with all characters who can fight her will unlock Sequence X. Yuri is playable in Sequence X, where she fights Stern, Levi, Kyrie, Dearche and Amitie.

As a playable character, she doesn't have the same moves like her Final Boss version. Her strength relies more in close range, as she has slow but powerful attacks, which makes it unfortunately easy to counter her. She has some strong long range attacks, but they are not that useful and are also rather slow, and one of her spells have poor range. But her Full Drive Burst has the longest range after Yuuno and Precia, is very fast and it deals 50% basic damage. Even the playable version is a lot tougher than any other character, having 150% basic defense. Her personal skill is Burst Power Level 3, giving her Full Drive Burst more power.