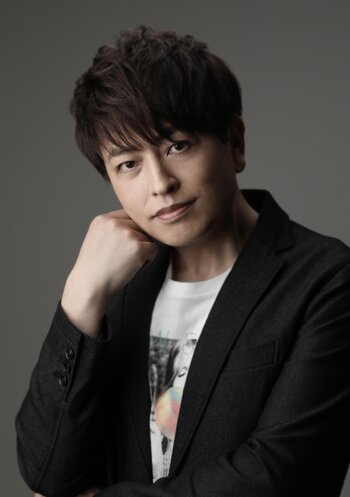 Describe Hikaru Midorikawa here or I will kill you.

In 1995, Japan, one seiyuu had the entire anime world's attention due to a certain anime series. He's stylish at voicing cool Bishōnen characters, he's stylish at doing Angsty roles, and he's even stylish when doing Hot-Blooded or silly characters. Every single role he does is... Cool. Cooler. Coolest. He lives an overwhelmingly cool, stylish seiyuu life. And his name is... at the picture caption.

Though born in 1968 and already married, he manages other activities other than being a seiyuu, such as website managing (he's got one though he had to shut it down for a while

due to Fan Dumb) and playing video games. Apparently, he's a big fan of Super Robot Wars, to the extent of writing a blog entry on the SRW site, contacting Banpresto and happily doing extra lines for his characters (especially Masaki) for free. He usually becomes a beta tester for the games, too. He also have a habit to turn the characters he voices into one man armies in the SRWs (namely Heero and Masaki; he'll probably do the same to Xingke when he shows up in Z2, or Asakim in case he's recruitable)

He's close friends with voice actors, Nobuyuki Hiyama and Ryotaro Okiayu, who both shared a bit of his SRW passion. note Hiyama voices Haken Browning, and was known to "officially pledge" in following Midorikawa's footsteps to fully nerd in SRW. While Okiayu voices Raidiese F. Branstein and sometimes plays SRW together with Midorikawa. He was also a member of a music group with Nobutoshi Canna, but his greatest, most known relationship amongst voice actors is definitely Takehito Koyasu; they often play roles that rivals each others, and Koyasu has once teased that Midorikawa's voice sounded cute; on the other hand, Midorikawa teased that Koyasu's voice sounded sexy.

Truly a Man of a Thousand Voices.

Well these tropes are just a small portion of Midorikawa's style: