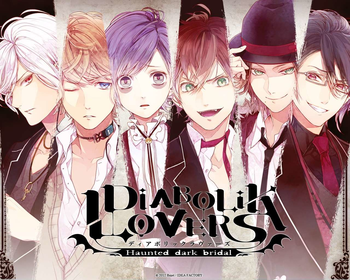 Yui Komori is a positive-thinking girl who nevertheless is troubled by seeing spirits and experiencing poltergeist phenomena. She lives with her father, a priest, until he is called overseas due to work and she is not allowed to accompany him. Instead, she is given a certain address and instructed to go there, saying the people living there are "relatives". Yui follows her father's orders and arrives at a mysterious mansion as the address had suggested. As she discovers what's in the house, she meets the six Sakamaki brothers (Shu, Reiji, Ayato, Kanato, Laito and Subaru) who are actually vampires. In order to have some control, she requests to be able to choose who sucks her blood. As she she spends more time knowing them more, she discovers a shocking secret inside her body.

Diabolik Lovers started out as a series of Drama CDs which were developed into a otome game developed by Rejet and distributed by Otomate. It became a popular series and has spawned more games and Drama CDs, an anime series, and Character Songs.

As part of Rejet's Archive YouTube channel project in 2020, the entire first series of Otome CDs has been made available for free listening.

Has nothing to do whatsoever with Diabolik.