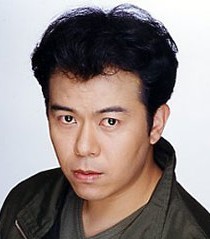 Nobutoshi Canna (born June 10, 1968), previously known as Nobutoshi Hayashi, changed his name right at the beginning of the year 2000. Nobutoshi Canna is also one of the more prominent anime seiyuus in the '90s, and still continue to do things in this day.

As for his roles, he's mostly set on badasses, but usually they're not on the spectrum of old men. He can also do intellectual people, Hot-Blooded people, or goody two shoes, or even a kid (in Super Robot Wars A Portable, he actually voiced Uchuta from Zambot 3!). He also has a tendency to voice people who just like to fight and can pull off Bruce Lee Clone roles just fine.

Now to put on Nobutoshi Canna's roles, and the timing is 10 seconds!

He has several friends in the industry, including Hikaru Midorikawa, who was once a fellow music group member, as well as his current good friend Showtaro Morikubo (which is why Canna volunteered to take over as Shikamaru when Morikubo's sick, they also played pairs in Get Backers). And finally? He has a long list of relations with Toshiyuki Morikawa, as evidenced with his roles in Berserk, Super Robot Wars and Bleach (and there's more).

And that's a minute. Did you have a nice read--
*SPLAT*
This description died! You are not human!!