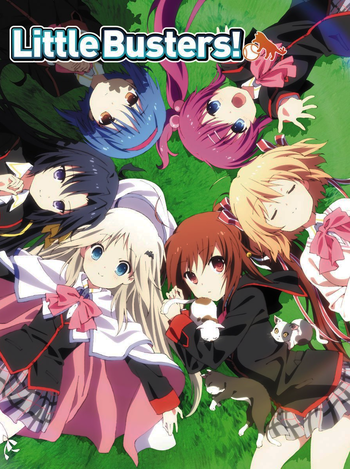 Do you know the secret of the world?
"What 'Adolescence' do you have?
Do you remember 'Childhood'?
This will remind you that you have to recollect 'Adolescence'.
The irreplaceable one existed there."
Advertisement:

Little Busters! tells the story of protagonist Riki Naoe, who is a member of the titular Little Busters, a group consisting of four boys and one girl who have all been close friends since childhood. The other members are the leader Kyousuke, his shy and quiet sister Rin, the muscle-obsessed Masato and the kendo user Kengo. The story begins one day in the Little Busters' second year of high school, when they decide to play a game of baseball but need more players. Riki recruits five new girls to join them: childlike Komari, troublemaker Haruka, big-sisterly Yuiko, frail Mio, and But Not Too Foreign Kudryavka.

And thus begins a laid-back and certainly not horribly depressing Dating Sim-type Visual Novel with a touch of Fighting Game, wherein you (as Riki) try to befriend the various girls, while getting into fights with the other Little Busters and several other people at your school. Or at least, they'd like you to think that's what it is. But it's Key Visual Arts, so of course there's more to it than that.

(Before reading the list of tropes, note that some of them are, in and of themselves, spoilers.)

The characters sheet is under heavy construction here.

Little Busters! finally got an anime adaptation that began airing in October 2012 and is animated by JC Staff. Viewers living in the USA, Canada, UK, Ireland, South Africa, Australia, New Zealand, Netherlands, and Scandinavia may watch the anime legally at Crunchyroll.

A second season titled Little Busters! ~Refrain~ aired during the Fall 2013 Anime season, and an adaptation for Ecstasy was released as a series of OVA episodes bundled with the Refrain DVDs and Blurays. The adaption, entitled Little Busters EX, is composed of eight episodes. There are seven volumes of Refrain released in all, and one episode was released with each volume (except for the final volume, which contains the final two episodes). The first volume and thus the first EX episode was released on the 29th of January, 2014.

On October 31, 2015, VisualArts/Key announced plans to release the Updated Re-Release of Little Busters!, originally titled Little Busters! Perfect Edition, on Steam with localization work being done by Fruitbat Factory using the Fan Translation of the original Little Busters! by Team Fluffy, a fan translation group that many Fruitbat Factory staff members were a part of, being used as a basis for the official English release. On November 1, 2017, the Perfect Edition was released on Steam under the title Little Busters! English Edition. The new content in the English Edition includes the three routes that were included in Ecstasy alongside the original content, but with the pornographic content removed.