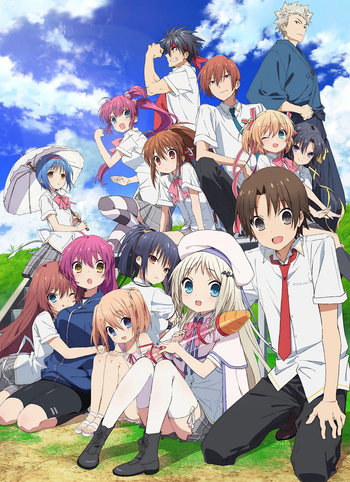 As always, beware of SPOILERS.

The protagonist of the visual novel and the fifth and last member of the original Little Busters. A sophomore in high school. His parents died when he was young, and it was Kyousuke and the others that pulled him out of his depression. He has a meek disposition and a frail body, and is generally considered the weakest of the group, but he's also the one with the most common sense.

Prideful Kitten Who Doesn't Easily Take To Others
Rin Natsume

The main heroine and the secondary protagonist of the visual novel. Kyousuke's younger sister. Despite having a fiery temper, she's very shy around strangers and is thus initially unable to make friends outside of the Little Busters.

Rin's older brother and the leader of the Little Busters. Because he's the oldest and the most reliable out of the group, he is respected (for the most part) by the other members and looked up to, and as such, also acts as a mediator whenever a fight breaks out between two of the members. He's also the one who comes up with missions and things to do for the others, either to help them out or simply to kill time.

The third member of the Little Busters and Riki's roommate. He's obsessed with working out and maintaining his muscles, but falls a bit short when it comes to flexing his mind. He's often found bickering with Kengo over something stupid, and even more often found receiving a high kick from Rin for saying something stupid. Despite his tendency to often say things without thinking, he is considerate toward others and is very fond of Riki.

The fourth member of the Little Busters, and the one with the most sense after Riki. He practices kendo, making him the only member of the group who actually participates in a club activity, and is the only member to refuse to play baseball as a team (at least on the first playthrough.) He has a cynical personality and often gets into a fight with Masato.

Additional Members of the Little Busters 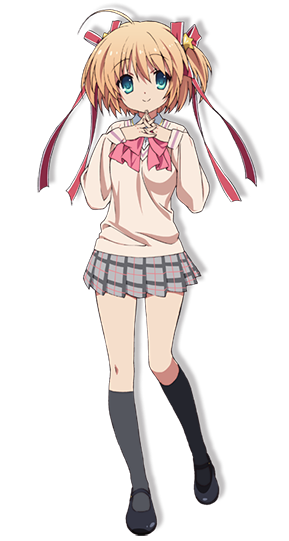 The first girl Riki recruits into Little Busters. Komari is very popular with people in general due to her friendliness and cuteness, but quick thinking isn't her forte and she is clumsy both in action and words (often embarrassing herself by talking too much). She has rather childish interests, showing a fondness for things like fairy tales, picture books and sweets, but she also does quite well in her studies. 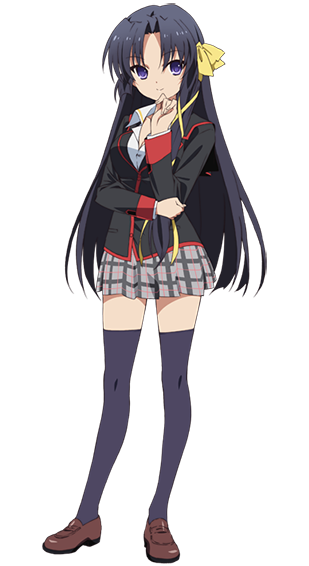 Kurugaya (who prefers people to refer to her by her last name) is in the same grade and age as Riki and most of the other characters, but she both acts and talks in a very mature fashion, pretty much cementing her image as an older sister to everyone. She is also extremely smart and agile, and have traumatized Masato, Kengo and Kyousuke by beating them in combat in the past. 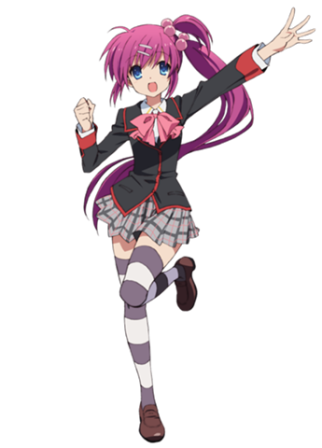 Haruka is the only main character (aside from Kyousuke) that's in a different class from most of the other Little Busters, but she pretty much hangs out all the time in Riki's class anyways. She active enjoys causing as much of a ruckus as she can in school (and in other situations too), and thus is the bitter opponent in the eyes of the school's disciplinary committee headed by Kanata Futaki. Left-handed.

Kudryavka (whose name is generally shortened to "Kud") is one-quarter Japanese and three-quarter Russian, and is born and raised in the fictional southern island state of Tebwa (formerly part of Soviet Union). She is studying abroad in Riki's school, but she is very knowledgeable in Japanese (both the language and its culture) due to the influence of her grandfather. However, Kud seems to have a much higher interest in learning English instead and tries to speak it whenever she can (usually failing horribly).

Mio is a calm, quiet girl who enjoys reading. She tends to not actively interact with others and thus has very little presence in general. She keeps a parasol around whenever outside due to her weak health and never takes part in any sports activities. Nevertheless, Riki was successful in recruiting her at least as the manager of the baseball team. 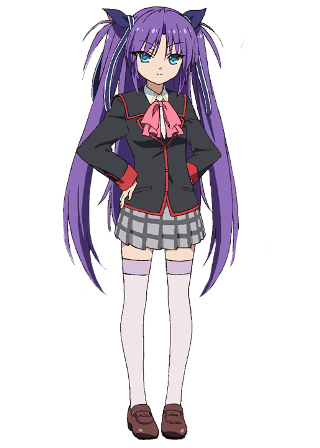 Captain of the softball club and self-styled rival of Rin. She's very popular with her club and generally has three fangirls following her everywhere, whom she sends in the ring first whenever a fight between her and Rin breaks out. She seems to harbor a crush on Kengo. 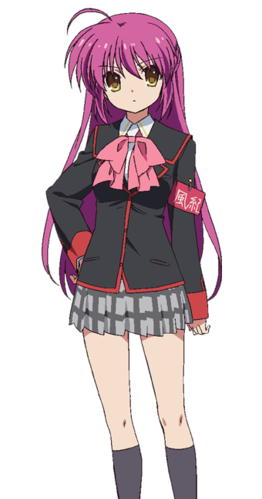 The leader of the school's disciplinary committee, Kanata is extremely serious about her work and tends to be very cold with people in general, particularly with Haruka, who is a constant source of trouble for her. Kurugaya seems to be the only one who can intimidate her. She's good friends with "A-chan", the head of dormitory and sometimes help her out with paperwork. If Riki doesn't find Kud a roommate, the position defaults to her when she insists on staying with Kud. 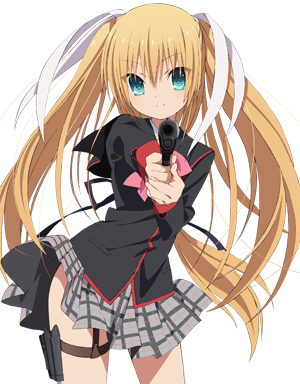 During day times she is simply an extremely popular girl in Riki's class, but at night Saya wanders the school seeking some sort of trouble hidden deep within the labyrinths below the school buildings and fights with shadowy figures whom she refers as "Darkness executives" who prevent her from seeking the treasure, as well as spies from other hostile factions. 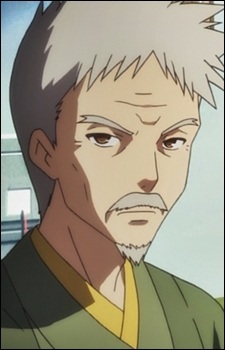 Kojiro is Komari's grandfather, who was married to a woman named Komari himself, though she is deceased. Kojiro remarks that Komari is remarkably similar to his late wife. He harbors some respect for Riki because of the way he stands up for himself. 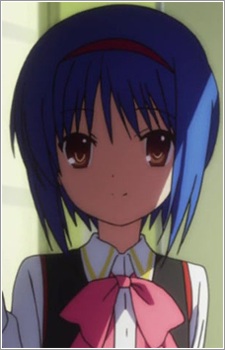 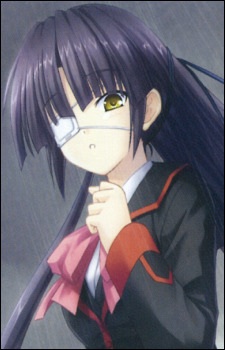 A beautiful girl who lost her sight in one eye, she now wears an eyepatch. Due to the loss of the eye, she can no longer practice archery and is both lost and depressed.

A girl in Riki's class who has had a crush on him since her first year, she has been too shy to speak up about it. She apparently does not stand out much. She has two friends that appear to be punks or bullies. 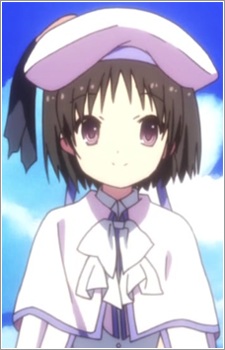 Kud's mother. She is an astronaut.

Kud's previous roommate for a time in Kud's home country. She came to Japan to take part in cultural exchange program. 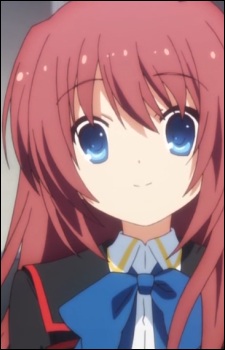 The girl's dorm manager and a third year, A-chan has a small non-voiced role in the original Little Busters. She's one of Rin's few friends and appears to be an acquaintance of Kurugaya's.