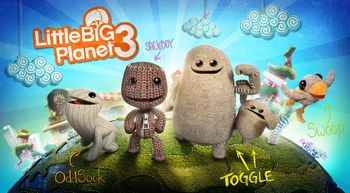 Don't be fooled by their cuteness, they have The Power of Creation. And so do you.
"On the LittleBigPlanet, you're a little Sackperson. This one is you. Aw, bless. You're quite the cute one."
— Stephen Fry
Advertisement:

LittleBigPlanet is a video game series started by Media Molecule in 2008, originally for the PlayStation 3. At its core, the series is a 2½D Co-Op Multiplayer Platform Game with a robust Level Editor, all of which informs its tagline: "Play, Create, Share". The series has gone through many installments in its more than 12 years of existence:

In addition to all these titles, Sackboy is also among the 20 base roster characters in 2012's PlayStation All-Stars Battle Royale, with a Sackgirl alternate costume as a Pre-Order Bonus (and later a regular DLC).

Example of:
We Can Rule Together