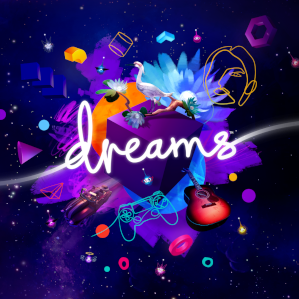 Dreams is a video game for the PlayStation 4. It was released on February 14, 2020 and developed by LittleBigPlanet and Tearaway creators Media Molecule. It follows the same "Play, Create, Share" principle as LittleBigPlanet, but intends to offer a more smooth transition between the modes, almost "merging" them, and giving the player complete control.
Advertisement:

The game's story mode 'Art's Dream', tells the tale of a bassist for a jazz band as he battles the manifestations of his own fears/insecurities, with the help of his childhood toys.

After several closed betas, and Early Access, it was released on February 14, 2020.

Tropes for the game as a whole: