Characters from the LittleBigPlanet series. 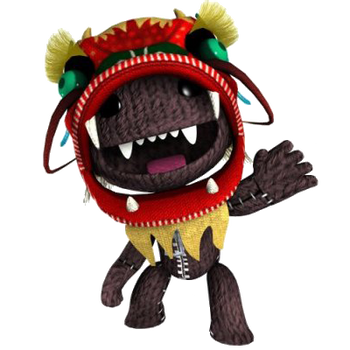 Awww, isn't he just the cutest!

The main character of the series. For tropes relating to his appearance in PlayStation All-Stars Battle Royale, see here. 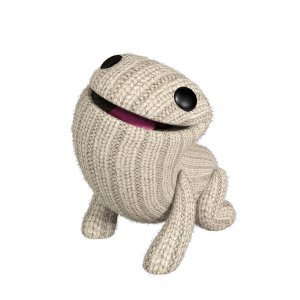 The first of Bunkum's heroes, a four-legged, fast-running character from Manglewood.
Toggle 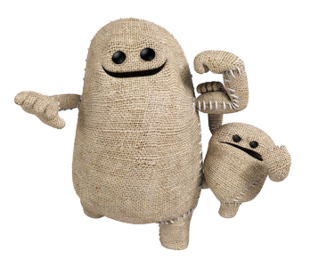 The second of Bunkum's heroes, a size-changing character who lives in the caverns underneath the Ziggurat.
Swoop 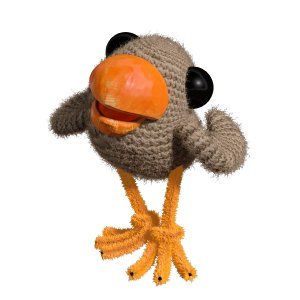 The third of Bunkum's heroes, a bird who lives in Bunkum Lagoon.
Advertisement:

The King
The first character you meet in the game, and Creator Curator of the Gardens.
Sheriff Zapata
The corrupt sheriff of the Canyons, and enemy of Uncle Jalapeno.
Ze Dude
Mag's nemesis from the Metropolis.
The Evil Sumo
An Evil Sumo from the Islands who works with the Terrible Oni.
Advertisement:
The Collector
The main villain of the first game (to the extent it has a villain). His aim is to steal other people's creations, and kidnap them. 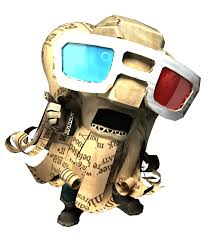 Voiced by: Robbie Stevens
The leader and founder of the Alliance and the Creator Curator of Da Vinci’s Hideout. He is a passionate, dramatic scholar who looks over the Alliance.
The Negativitron 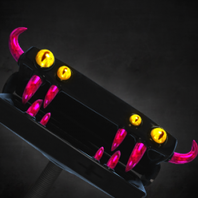 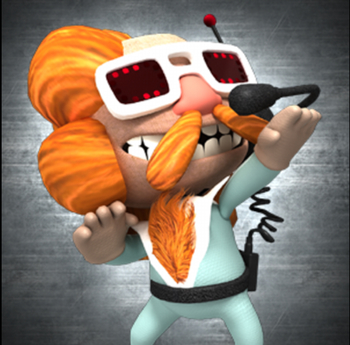 I... AM AVALON CENTRIFUGE!
Voiced by: Colin McFarlane
The second-in-command of the Alliance, but he thinks he's the leader.
Victoria von Bathysphere 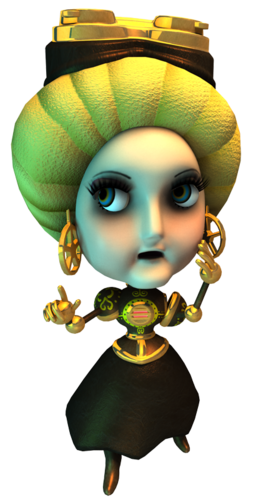 Years of building and baking down the plug hole!
Voiced by: Judith Sweeney
An inventor and baker who joins the Alliance, and later works as a Popit Professor.
Clive Handforth 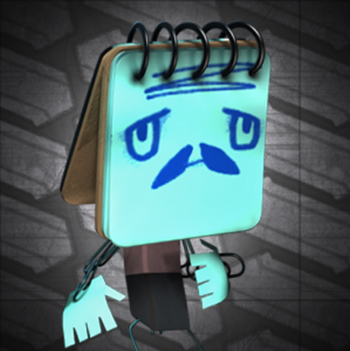 And I thought my life had hit rock bottom when they told me about saturated fat!
Voiced by: Barry Meade
The depressed owner of the Factory of a Better Tomorrow. He joins the Alliance when the Negativitron invades.
Eve Silva Paragorica 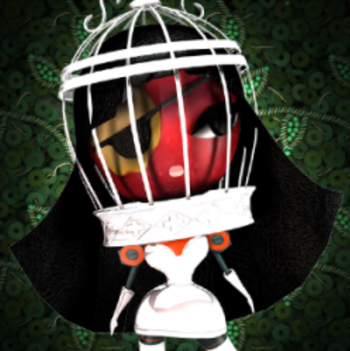 Voiced by: Jules de Jongh
The sixth member to join the Alliance, and the Creator Curator of Eve's Asylum for the Mentally Alternative. She is extremely optimistic, and always encourages people to look on the “bright side of things” even when the situation is unimaginably bleak. She’s very skilled with medicine and exceptionally caring for everyone, serving as The Heart for the team, but she has a bit of a selfish streak...

When Clive and Sackboy help defend her tree from the Meanies, she joins the Alliance. 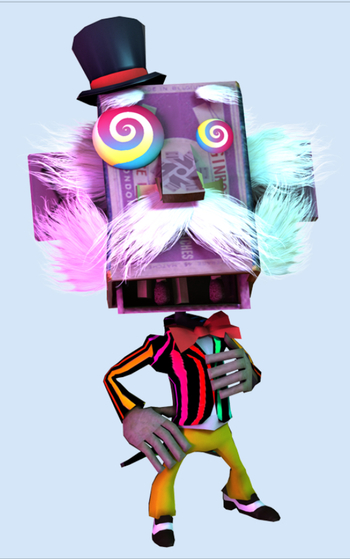 Not wasting a moment, let’s blast off!
Voiced by: Ewan Bailey
The seventh and final member of The Alliance, and the Creator Curator of The Cosmos. He’s highly regarded throughout Craftworld, and is considered to be the greatest creator who ever lived. But he’s kind of a weirdo. He constantly spouts Meaningless Meaningful Words, eats socks, licks people’s eyeballs, and has a weird obsession with video games. 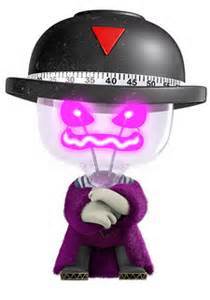 Voiced by: Hugh Laurie
A friendly but not-too-bright lightbulb. He becomes the main antagonist of the game when he's possessed by the Titans.
Pinky Buflooms
Voiced by: Alix Wilton Reagan
The very angry queen of Bunkum Lagoon.
Marlon Random

The Creator Curator of the Ziggurat.
The Titans
Three monsters who sucked Bunkum dry of creativity, before being defeated by Toggle, OddSock and Swoop and sealed in a tea tin. The game's plot is kicked off by Newton misguidedly freeing them. They then possess him and set off to destroy Bunkum.
Nana Pud

A racer from Manglewood, who has the Contraption Challenge "The Wheel Deal".
El Jeff

A trio of guards defending the fort in the Manglewood level "High Stakes Heist".
Zom Zom

A strange-accented merchant. He has costume shops in Manglewood, the Ziggurat, and Bunkum Lagoon. 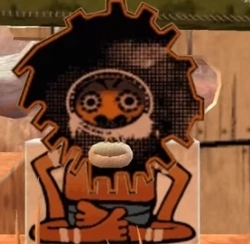 Bruce is the first character you meet in LittleBigPlanet PSP. He appears in Down Under and guides you throught the first two levels.
The Mystic 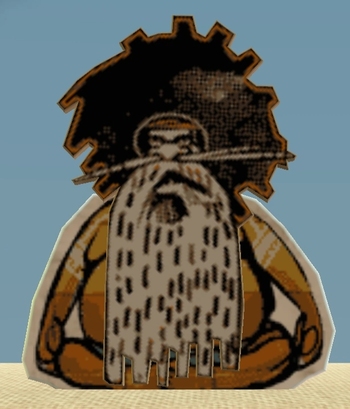 The Mystic is the first Creator Curator introduced in the game. His theme is Down Under, based after Australia. He is said to be the keeper of the very first LittleBigPlanet idea, which would make him the Overlord of LBP in a way.
Emperor Sario 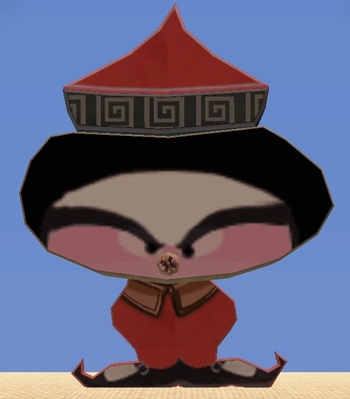 A young boy who is The Orient's Creator Curator. Initially wants you to help him build his "Great Wall" and save it from a dragon, but then it is discovered that the dragon just wants its egg that was stolen. He then helps you get the egg for the dragon.
The Dragon 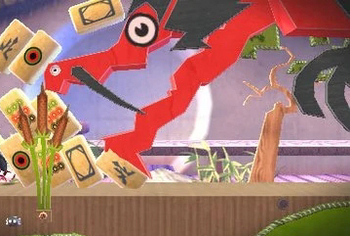 The Dragon is an enemy that appears in the first few levels of The Orient. She is seeking for the egg that was stolen from her and burning everything to the ground. The player needs to go through a series of puzzles to bring the egg to her.
The Genie 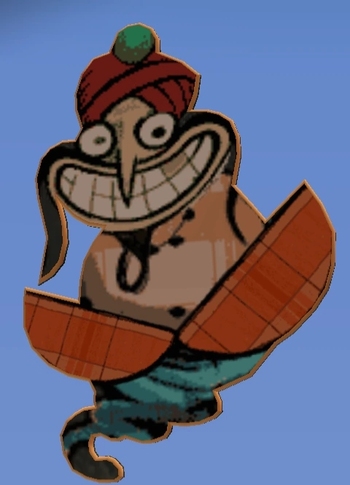 The Genie is the third creator in LittleBigPlanet PSP. His area is The Bazaar.
Prince Funubis 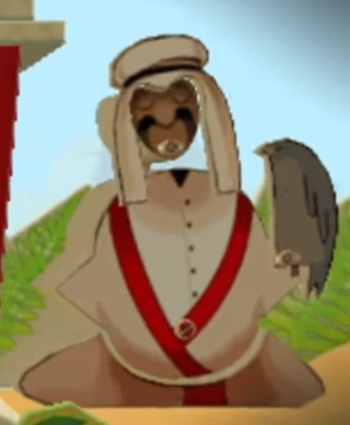 Prince Funubis is the Creator Curator of Golden Sands. He needs Sackboy's help with building a fun park.
Clock Hans 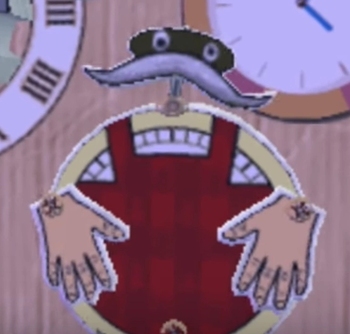 Clock Hans is the Creator Curator of Alpine Run. He tasks you with finding his three sons who are in danger.
Clock Hans's Children
The Director/Ed Wooden 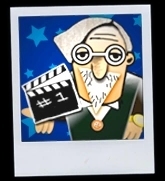 The Director is a Creator Curator of Tinsel Town, where he has Sackboy star in several movies, including a spy, an alien invasion and haunted house movie.

The greatest hero in the Imagisphere...or at least he thinks he is. He often ends up in trouble thanks to technical difficulties, not planning ahead, and having a short attention span.
Mrs. Sunshine

A clown who's been lost in the Spooky Mansion for ages.
The Hollows
Evil little puppets that cause distress throughout Carnivalia. They're the game's main villains.
The Puppeteer
Voiced by: Alexander Morton
Seemingly the main antagonist of LittleBigPlanet PS Vita. Once the greatest entertainer in the Imagisphere, The Puppeteer eventually became lonely, always being behind the scenes, and the quality of his shows began to suffer. Eventually, people started booing him, causing him to throw his puppets away and run off. At first, it's thought that he's returned and turned evil, but it's later revealed that the Hollows have locked him up, and are pretending to be him.

The Hoard
The game's main antagonists. A race of creatures who came from outside the Imagisphere to steal everything not nailed down.
Huge Monster
A Huge Monster from Monster Islands. Her egg is stolen by the Hoard.
Don Doubtworthy
Creator Curator of the Progress Emporium.
Vernon the Lab Rat
A rat who lives in Victoria's Lab, eating all her food.
Captain Sirius Oculus
The owner of the Space Bass.