Non-DLC characters on the initial roster originating from first and second-party properties for Sony Computer Entertainment.

Go here for the main article.

Go here to return to the main characters page. 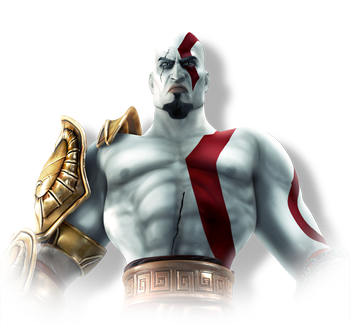 THE MORTAL BENT ON THE GODS' DESTRUCTION
"Prepare to join Hades!"

Once the leader of the mighty Spartan army, Kratos has wrenched his fate free from the gods who used him as their servant, swearing to see their reign ended. Known for a brutal approach to combat, he will let nothing stand between him and his quest to find and destroy whomever has gathered the combatants in Battle Royale. 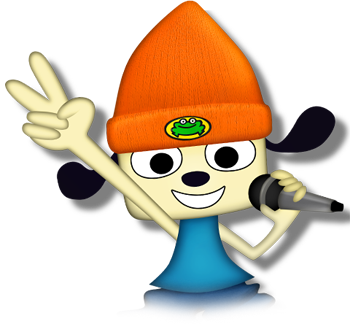 SUCCESS WHEN HE BELIEVES IN HIMSELF
"Time to jam!"

With his trademark red cap and ever-present microphone, PaRappa entertains crowds the world over with his freestyle rapping and skateboarding prowess. Trained by Chop Chop Master Onion, PaRappa is as formidable in combat as he is on stage, bringing all of his talents to bear, the most important of which is his indomitable belief in himself. 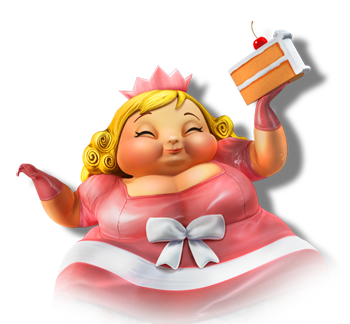 A BUBBLY PRINCESS IN SEARCH OF CAKE
"Get ready to eat cake!"

Revered by her subjects in her kingdom, the Princess's insatiable love of cake has led her, and her troops, to nearby kingdoms in search of the baked goods she craves. Her sweet nature should not be confused with a lack of fortitude, as she and her guards make short work of anyone who dares stand between her and her prize. When the Princess puts her mind to something, look out! 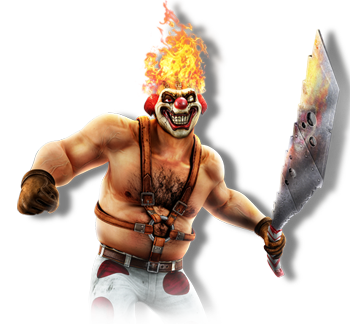 PSYCHOPATHIC CLOWN
"Time for some fun."

Marcus Kane had it all — big house, beautiful family, and a great job serving ice cream to the neighborhood kids. Then something went wrong. Very wrong. When he donned the mask and became Sweet Tooth, there was no going back. Now he carves a path of destruction and desolation, whether in his legendary ice cream truck or on foot. Violence is what he craves, wherever it can be found, and whomever it can be inflicted upon. 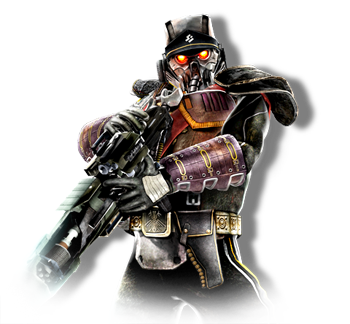 VICIOUS LEADER OF THE HELGHAST FORCES
"For the glory of Helghan!"

Colonel Mael Radec is a brilliant tactician who leads his troops from the front. His unwavering focus on victory at any cost has made the conquest of Helghast a formidable task for the ISA. He brings that same ruthlessness to personal combat, where he is the human personification of a shark — all of his training focused to a singular purpose: the destruction of his enemy. 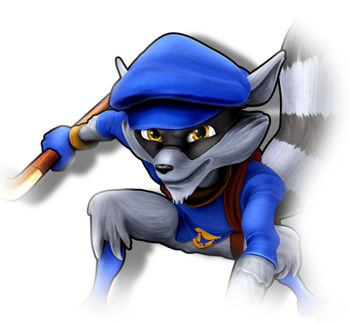 A MASTER THIEF AND HIS GANG
"Steal what's mine, then you better expect company."

Descended from a line of thieves which stretches back centuries, Sly continues the family tradition with grace and aplomb. With the help of his friends Bentley and Murray, the raccoon has infiltrated even the most heavily fortified locations while making away with treasures thought impossible to steal. Favoring stealth, reconnaissance, and cunning over brute strength, Sly and the Cooper Gang always stay two steps ahead of opponents. 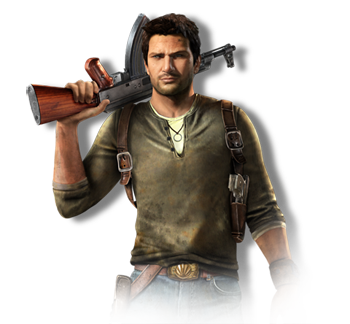 A fortune seeker who claims to be a descendant of Sir Francis Drake, Nathan's adventures have taken him from the jungles of Borneo to the snowy peaks of Nepal in search of the hidden treasures of the ancient world. A resourceful combatant, Drake has proved adept both in the use of weapons and in hand-to-hand combat, skills which have aided him immeasurably in overcoming those who would prevent him from reaching his prize. 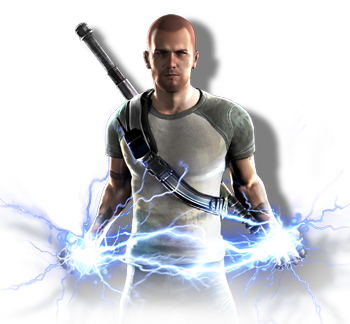 Cole MacGrath went from being a simple bike messenger to the savior of Empire City. Given powers from an exploding Ray Sphere, Cole has the ability to store, control, and unleash electricity in a variety of powerful ways. The electricity running through his body gives Cole enhanced strength, agility, durability, and reflexes as well as a fast healing factor. On the path of good, Cole is a selfless hero who uses his powers to battle evil and injustice throughout the city. 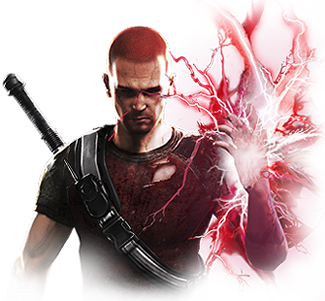 Granted dangerous new abilities by the Ray Sphere, Cole is consumed by a thirst for more power, however it can be gained. His remorseless and single-minded path shapes his powers toward the sinister and destructive, turning him into a shell of his former self. Indeed, his increase in power comes at a cost to his opponents, as he sucks the life out of others to heal himself more quickly. 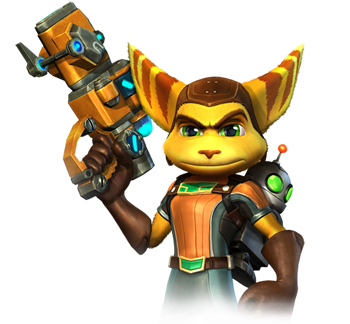 Armed with a seemingly endless arsenal of spectacularly bizarre and outlandish weapons and gadgets, the mechanic Ratchet and his robotic companion Clank have found themselves saving the universe from a myriad of threats, across both space and time. Their friendship forged over years of adventuring, they have learned to work extremely efficiently together, overwhelming opponents via both cunning and skill. 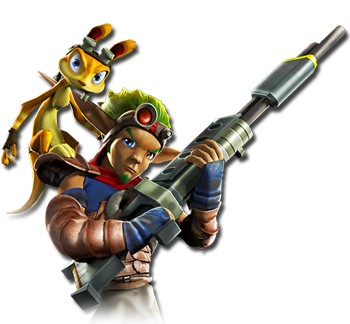 Lifelong best friends with a knack for getting themselves into and out of trouble, Jak and Daxter may not always agree on which of them is the true hero and which is the sidekick, but at least they know how to work together to defeat all threats to their planet. Jak's ability to manipulate Eco, the life force of their planet, combines with the duo's skill with gadgets, guns, and vehicles to make short work of those who wish them harm. 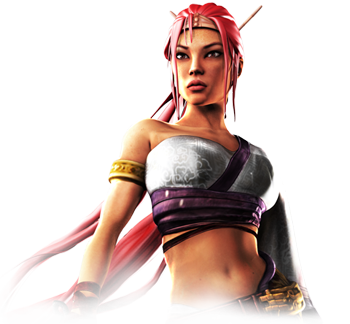 WIELDER OF THE GODLY BLADE
"Can no one stand against me?"

Nariko's birth was meant to serve as the arrival of the savior of her clan, the one who could wield the legendary Heavenly Sword, a fate originally foretold of a male. Despite her people's rejection, her father raised her to be a headstrong and fearless fighter. Joined with the legendary blade, she finds her skills, and her enemies' peril, amplified to heights undreamed of. 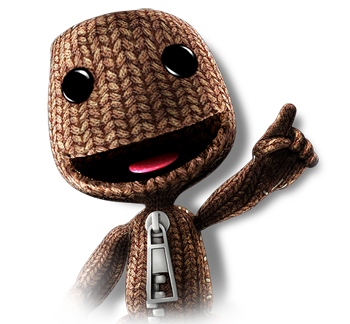 A small creature made of fabric, and imbued with the power to create, Sackboy inhabits the world of LittleBigPlanet. Using his mysterious PopIt, Sackboy can imagine objects into being, which aid him in any dangerous situation. Able to reshape the environment around him, Sackboy can present enemies with an ever-shifting array of obstacles to deal with, while dodging the Cakinator and Grabinator with which he is armed. 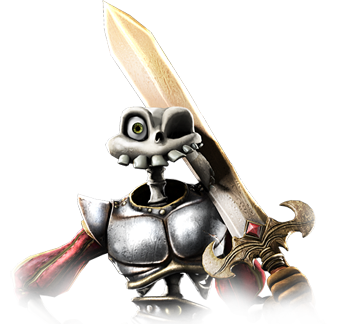 A coward whose celebration as a hero was unearned, Sir Daniel has been given a chance to redeem himself, proving in combat that he is worthy of his knighthood. He fights on behalf of his beloved homeland, Gallowmere, with his oath to protect her despite her citizens' somewhat waning interest in gallantry. 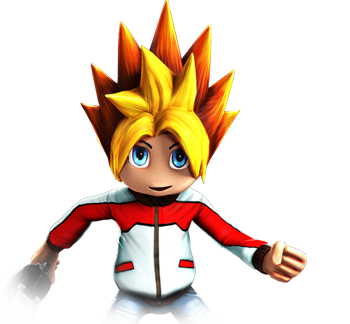 A young and energetic fourth-grader, Spike is accidentally sucked into a time machine by the hands of Specter, an ape granted uncanny intelligence through the use of an experimental cap. Spike embarks on a quest to stop Specter and his ape army, thwarting them using a variety of weapons, tools, and gadgets provided by his friend the Professor, including clubs, slingshots, an RC Satellite Laser, and Bananarang.

Blue Radar: This occurs when the attack is held for less than a second. 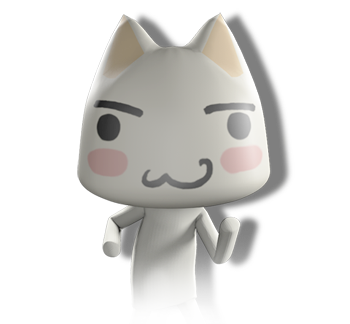 THE CAT WHO WOULD BE HUMAN
"Nya?"

Adopted by a kindly sushi store owner, this once-abandoned cat is on a quest to become more human. Toro has the ability to assume any of a variety of roles instantly, adapting as the situation requires. An unabashed fan of games, Toro is thrilled to finally meet so many of his heroes.