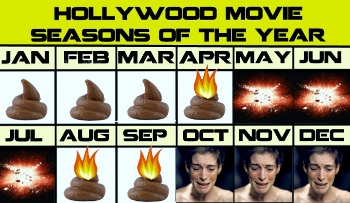 The big-screen version of the Friday Night Death Slot, the Dump Months are certain months of the year that are viewed as, effectively, cinematic landfills where little of value can be found at the box office. Disastrous productions that the studio wants to get behind them as quickly as possible with minimal fallout, low-budget genre fare that can't hang with the big boys of summer, star vehicles for fading stars, B-grade thrillers and comedies that aren't quite bad enough to be shuffled into the Direct to Video netherrealm, films that got Screwed by the Studio and are only getting released theatrically out of contractual obligation (or because somebody involved with the film has dirt on a studio executive) — all of this goes to the dump months to be forgotten about by the time they come out on home video and streaming and start airing late at night on cable three months later.

In North America, at least, there are two dump "seasons" — late summer (August and September), and winter (January, February, and sometimes early March).

Many of these films are often Not Screened for Critics.

Once in a while, a film released in a dump month will break out and become a hit. Defiance of the 'dump month curse' is a bit more common than defiance of the Friday Night Death Slot. In particular, given the reputation for crappy products that the dump months hold, a merely good film that would've been outshined by great ones at any other time of year has a chance of breaking out and becoming a Sleeper Hit.

Theaters tend to hate this practice, as while it means that their revenue may vary greatly from month to month, their expenses usually don't. Furthermore, their major fluctuation in expenses is seasonal hiring, which is caused by this phenomenon; they'd rather have a full-time staff, since training is its own expense and an experienced staff can provide better service. As a result, in April of 2013 the National Association of Theater Owners sharply criticized the studios for this practice, stating that they believe a good movie can do well in any month. (They also called for fewer R-rated films, and more movies featuring people of color.)

Note that the definition of a "dump month" is not static. Historically, while spring, summer, and late fall have always been premium release seasons, January didn't always have its toxic reputation. Boston Globe film critic Ty Burr has noted

that, during the days of the studio system, January saw far more high-quality releases than it did after, with The '40s serving as the high point for January releases. The antitrust decision United States v. Paramount Pictures, Inc. in 1948, forcing the studios to divest their theater chains and end the practice of block booking, meant that movies were no longer guaranteed a long theatrical run at every point in the year, leading studios to cluster their biggest releases around holidays and warmer weather. By The '80s, with summer blockbusters rising to prominence, the idea of the January leper colony had solidified.

Following the closure of theaters in the spring of 2020 during the COVID-19 pandemic, film studios have delayed or rescheduled their planned films at later date, or moved them to streaming services. Since films released on streaming services varied from good, to bad, to surprisingly good, to so-bad-it's-good, to average, to downright horrible, it was said that the film cycle was stuck to a "perpetual January".

A similar practice exists in book publishing. For example, industry wisdom says not to release your novel in August, or for that matter, anything but textbooks (as that's what people will need in September).

It also exists in Video Games, especially around Christmas, as more sales are expected as gifts.

It also happens to an extent in anime, as the strongest series are reserved for the Fall and Spring TV seasons in Japan.

No Real Life Examples, Please! Fictional examples, discussions of, and references to the trope in other media are acceptable, but a list of films cited as examples of what gets released during 'dump months' is simply too likely to turn into Complaining About Movies You Don't Like.