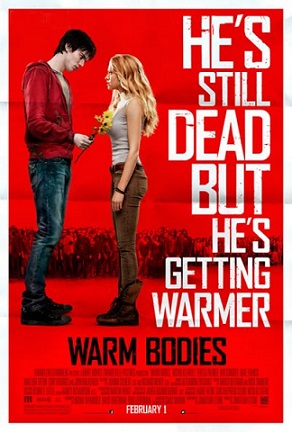 He was dead inside... until he met her.
Advertisement:

R is dead, but, so far, he doesn't mind at all - it's hard to mind when you're mindless, you know.

That all changes when R (Nicholas Hoult), leading a zombie horde, finds a group of survivors near his daily hangout, an airport. While attacking the survivors, he is struck by his first inkling of a feeling for an unknown woman. Before he can approach her, he's shot. Being undead and hungry (and now irritated), he kills and eats his shooter, a young man named Perry.

As he bites and chews into his brains (they're the tastiest part), he absorbs the memories of Perry, who just happened to be the lover of R's unknown dream girl, Julie. Strengthened by a mix of his own feelings for her and the ones he's just consumed, he feels the need to protect her from his undead cohorts. Fortunately for R, Julie is hiding nearby, and hasn't seen him consume the flesh of Perry. Unfortunately for R, he's a zombie. Zombies eat people. People shoot zombies. That's a fact. But R has this need to take and protect Julie from the others, leading her to an abandoned plane and sheltering her, all the while attempting to get closer. Somehow.

It doesn't seem like he thought this out very well, what with the other zombies getting suspicious and a breed of superzombies - dubbed "Boneys" - out to consume all fresh meat, but, hey. Love finds a way, right?

Warm Bodies is a 2013 RomZomCom, a tale of a girl and a ghoul slowly falling in love. It is based on a 2011 book of the same name.

Was there ever a tale of more woe
Than this of Julie and her Romero?