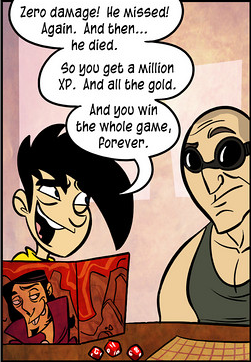 Don't mess with Vin Diesel...
"If you kill another one of my friends, I'll divorce you."
— Lindsay (Feylin Hilltopple), RPGMP3
Advertisement:

"Dungeonmaster's Girlfriend" is a term used in Tabletop RPG circles for a player — often literally the DM's significant other, sometimes a younger family member — who is getting special treatment from the Game Master due to an out-of-game personal relationship, specifically because the GM either wants to curry favor with them or is afraid of incurring their ire. This is often at the expense of other players, who showed up at the table to participate equally, but have somehow ended up playing sidekicks to the Dungeonmaster's Girlfriend.

This trope is much older than (and not limited to) gaming situations, though. Before there were RPGs, it was a situation that would arise in theater, film, and TV — the director would give his girlfriend a large or important role, or a producer would insist that his current girlfriend be given a part as a condition for his backing. In most cases, she is not competent enough to handle a major role; in some, she's not competent at all.

This is not a trope about someone that does something only because their significant other is doing it, though the situations do often overlap (sometimes the favoritism is in place to go easy on this new player). Also the “dungeon” in this instance is a tabletop game, not that kind of dungeon.

In case of roleplay, the boyfriend/girlfriend or sibling might actually have an advantage by knowing the DM better than the other players without any favoritism coming into play.

Compare Nepotism and Sleeping Their Way to the Top. This person may be regarded as something of a Yoko Oh No, especially in the case of film and music, and also may result in the Love Makes You Uncreative trope being invoked.