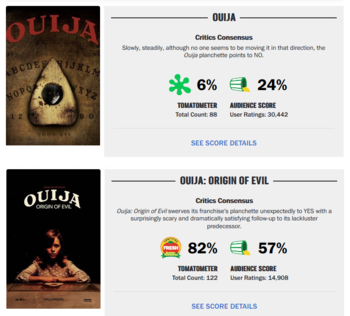 Talk about a glow-up.
(talking about Superbabies: Baby Geniuses 2) "Y'know, I want to write and direct the third installment of this franchise, and make it the best thing anyone has ever seen, just so I can force critics to say "My God, you have to see Baby Geniuses 3!"
— Ash, The Shitty Movie Night Podcast
Advertisement:

So you've read a book, watched a movie, or played a video game, and you're underwhelmed. Maybe the story was clichéd and unoriginal, or it was difficult to follow. The characters were little more than a handful of personality traits. If it was a video game, the gameplay maybe had some good ideas, but they were handled poorly and the effort was wasted.

The book, film, or game may even have been pretty good. It's just that after reading it, you try out the Sequel and you're completely blown away. It's much better. The story is more original, the pacing was fixed, the characters who seemed so flat before are now more fleshed out and interesting in their own right. If it's a video game, the gameplay has been much improved and everything comes together more tightly. You weren't expecting the next product to be this good, but it seems the creator(s) did indeed learn from their mistakes. You're rightly impressed.

There are several reasons for the surprisingly good sequel: Franchises with more regular production cycles can help studios retain talent and acquire financial backing more easily. It can also allow the production team more time to hone the stylistic aspects of their works. In fact, many authors and directors claim that some of their first work in a series was a near miss and they didn't really hit stride until the sequel. Franchises which plan things beforehand are particularly able to take advantage of this because they're less likely to get caught in in the sort of death spiral an open ended series can fall into.

Note this can still apply if the original is utterly terrible and the follow-up is merely So Okay, It's Average — the improvement is still very much there, even if the end result isn't as notable.

The opposite of Sequelitis in many cases, though sometimes a great sequel can produce a bad third or fourth installment, which would make it the opposite of Sophomore Slump. One rule espoused by some fans of comic-book style movies is that the sequels will have a chance to be better films overall, due to not having to get the origin out of the way.

Growing the Beard is similar, but it deals with a television series that becomes remarkably better once it finds its stride.

This is about the sequels to products that either sucked or weren't that good to begin with, but somehow magically improved a lot in the next installment. This is not about products that were already very good but got better. If the original was excellent to begin with rather than mediocre, then it's an Even Better Sequel. Naturally, examples will be subjective.