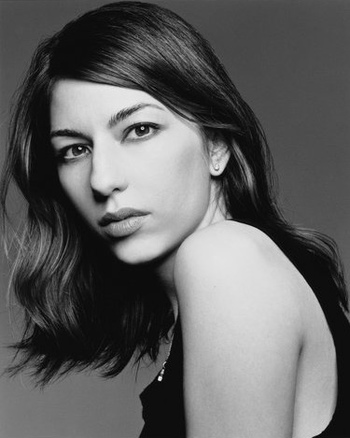 Sofia Carmina Coppola (born May 14, 1971) is an Academy Award-winning writer, director, producer and former actress. Her films are recognized for consistent elements including stories centered around females at turning points in their lives, a preference for expressing themes over plot, soft color palettes, recurring collaborators (Kirsten Dunst, Bill Murray, Elle Fanning, etc.), and a preference for patient, visual storytelling.

As the daughter of Francis Ford Coppola, Sofia was raised among prominent Hollywood artists note Her grandfather Carmine being a composer, her brother Roman Coppola being a screenwriter and director (a friend and collaborator of Wes Anderson in particular), Talia Shire being her aunt, and Nicolas Coppola (aka Nicolas Cage) and Jason Schwartzman as first cousins. The first industry she worked in was fashion, interning for Chanel at 15, and she later attended Mills College and CalArts, studying painting and eventually dropping out of the latter.

On account of her father being part of the New Hollywood, Sofia was raised among many Hollywood icons with George Lucas occasionally babysitting her (and Sofia admitting that she still thinks of him as her Honorary Uncle rather than the director of Star Wars), and growing up knowing the likes of Martin Scorsese and Steven Spielberg and other famous figures who gathered to pay court to her father.

If that sounds a little too much like the opening of The Godfather, then that's no accident.

Much as he did with all his children, Coppola gave Sofia cameos in his early films, with her appearing as a baby in the baptism scene in The Godfather, then as Diane Lane's kid sister in Rumble Fish and Nancy in Peggy Sue Got Married. While she also became involved behind her father's camera, co-writing the script for his short film in New York Stories at 18, she first gained recognition for her infamous performance as Mary Corleone in The Godfather Part III. She was the last-minute replacement for Winona Ryder, cast with production already underway and Coppola needing a success to stave off bankruptcy. While the film was nowhere near a flop, its responses were noticeably below those of its predecessors, and Sofia's performance became one of its most criticized aspects. Outside of her father's work, she also played Anne Chambers in Frankenweenie

(she was credited as "Domino"), and one of Queen Amidala's handmaidens (Saché) in The Phantom Menace.

Sofia would go on record stating that the intense backlash her Godfather performance received didn't affect her personally, as she had never wanted to be an actress in the first place. She didn't intend to become a filmmaker, either, but upon writing and directing the short film Lick the Star at the tail-end of the 1990s, she found that the field mixed her creative interests together perfectly. Her decade culminated in the release of her debut feature in 1999, The Virgin Suicides, which would become her Breakthrough Hit. The film was one of Kirsten Dunst's first adult roles, and she and Sofia would form a partnership, making three films together.

Sofia won further attention and acclaim for Lost in Translation, which contained Bill Murray's Career Resurrection as a serious actor, and Scarlett Johansson's Star-Making Role. The success of that film won her an Academy Award (for Original Screenplay rather than Directing), and it led to her becoming established as one of Hollywood's most prominent young filmmakers and one of the few major female directors.

She has continued to write and direct films, racking up awards and honors along the way, and has generally made arthouse or independent-leaning films rather than mainstream works, which has made for polarizing reception among audiences.

. They have two daughters together. She keeps a low profile, not wanting her daughters growing up jaded from being in the limelight.