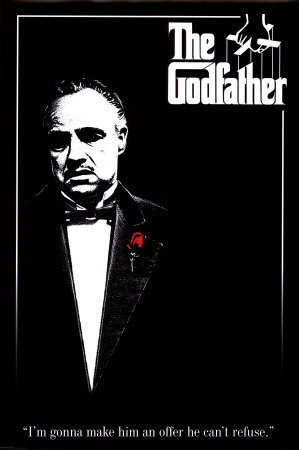 Not personal, it's strictly business.
"I believe in America."
Advertisement:

The Godfather is a film trilogy about a fictional Italian-American crime family, the Corleone Family. The first movie came out in 1972, and was based upon Mario Puzo's novel of the same name. It was followed by The Godfather Part II in 1974 and The Godfather Part III in 1990. Francis Ford Coppola directed the films and scripted them with Puzo, and Nino Rota composed the soundtrack for the first two films. The first two films are widely considered to be among the greatest films of all time and the flagship of the New Hollywood, due to being the first film to portray gangsters seriously as dramatic figures of real complexity, with real depth of character, and tell the story from their perspective. It served as a Star-Making Role for many members of its cast, including Al Pacino, Robert De Niro, Diane Keaton, James Caan, Robert Duvall and John Cazale, while Marlon Brando's performance as Vito Corleone is renowned as one of the most iconic in the history of cinema.

The scale of achievement is such that it not only defined the image of gangster culture in the popular consciousness but also influenced real gangsters and mafiosi to imitate the film's characters in style and manner of speech. Francis Ford Coppola admitted that he did very little actual research into the gangster culture and that to him the film was a stylistic "modern myth" about the Italian-American immigration experience.

In late 2020, Coppola released a Director's Cut of the third film both on home video and in selected theaters, which he retitled The Godfather, Coda: The Death of Michael Corleone.

Without Coppola's involvement or approval, the first two films were loosely adapted by EA Games into two free-roaming action/adventure games that let you create your own mobster and rise through the ranks. Content related to the video games goes here.

Two projects depicting the making of the film are in active development as of 2021 — the Barry Levinson movie Francis & The Godfather, starring Oscar Isaac as Coppola, and the Paramount+ series The Offer, based on the experiences of Godfather producer Al Ruddy.

The Godfather is the Trope Namer for:

I'm gonna make him a trope he cannot refuse.

open/close all folders
A - H
I - P
Q - Z
When the Sicilians wish you "Cent'anni"... it means "for long life"... and a Sicilian never forgets.
Feedback

Example of:
Kiss of Death