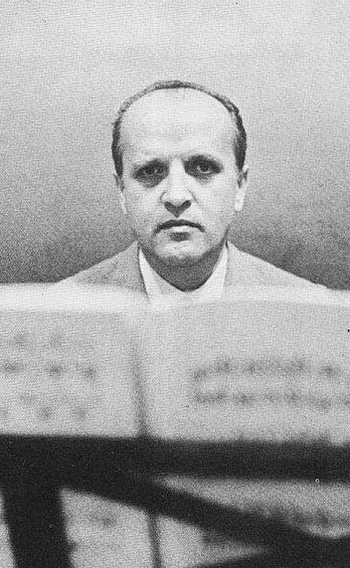 "He was someone who had a rare quality belonging to the world of intuition. Just like children, simple men, sensitive people, innocent people, he would suddenly say dazzling things. As soon as he arrived, stress disappeared, everything turned into a festive atmosphere; the movie entered a joyful, serene, fantastic period, a new life."
— Federico Fellini about his associated composer
Advertisement:

Giovanni Rota Rinaldi (3 December 1911 – 10 April 1979), better known as Nino Rota, was an Italian composer, pianist, conductor and music academic, and the other giant of Italian film scoring along with Ennio Morricone.

He was very prolific, writing more than 150 scores for Italian and international productions from The '30s up until his death in 1979, with an average of three scores per year (as many as ten scores per year at his busiest). His most famous collaborations included the likes of Luchino Visconti, Federico Fellini and Francis Ford Coppola.

His film music style is characterised by good-humoured energy verging on satire, once compared to a blend between the theatrical irony of Sergei Prokofiev, the impish wit of Francis Poulenc and jazz idioms ala Henry Mancini. He didn't outright ignore the emotional side of the films he scored, but generally avoided the overly sentimental by coming at the subject obliquely with a slight sense of the absurd, which fitted the filmmaking style of Fellini like a glove.

Films scored by him on this wiki: