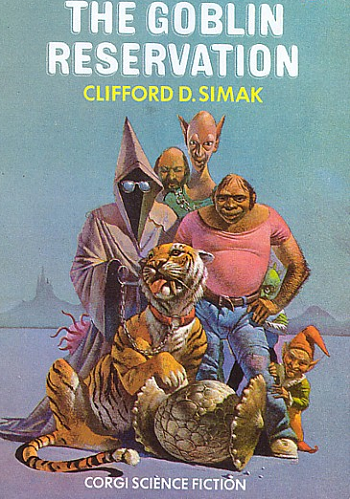 The Goblin Reservation is a 1968 science fiction novel by Clifford Simak, set in the distant future when the Earth has been transformed into a university planet; a planet where creatures from all over the galaxy come to study, teach, and be entertained by the amazing discoveries that Earth is now rich with. Among the many things that Earth can now boast is Time University: a university devoted to slipping through time and discovering the truth about past events. People and creatures from the past are brought forward in time to be interviewed, studied and to provide entertainment for the people of the future. The creatures that people of the past always thought to be myth — such as trolls, fairies, goblins, and the like — have been discovered and placed on various reservations where they live and are studied by those working at Supernatural, a division of the planet-wide university.
Advertisement:

Peter Maxwell, professor of Supernatural and a dear friend to most of the Little Folk, travels to a distant Coonskin stellar system to check the rumors about the dragon there, only to find himself on a strange, free-roaming crystal planet inhabited by ghostly creatures who make him — and the humanity — an incredibly generous offer. Upon returning to Earth, Maxwell learns, to his further shock, that the Crystal planet did not intercept him in subspace, but duplicated him instead. The other Maxwell went to Coonskin as intended, found nothing and returned early... only to die in a freak accident a week later. Maxwell finds himself legally dead, his place at Supernatural already taken and his old apartment rented by Time historian Carol Hampton and her pet bio-mech sabertooth cat Sylvester.

Confused, he invites the girl for a dinner, where they meet Maxwell's friends — Alley Oop, a Neanderthal rescued from certain death in his native age (or so he says) and educated in the future, and the Ghost. When, while discussing Maxwell's accident, Carol slips that Time is going to sell the mysterious Artifact — a black, indestructible block of unknown material found in Jurassic, Maxwell starts to suspect that "his" murder, the offer he was made, the Artifact and the Wheelers — creepy hive-like wheeled aliens from the other side of galaxy — may be tied together.

Tropes described in The Goblin Reservation: