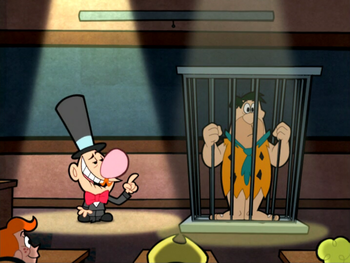 A caveman in a modern-day setting. He either is an unfrozen Human Popsicle or got here through Time Travel. If he's capable of speech, expect Hulk Speak; if not, grunting is the way to go. Occasionally, this is subverted by having the caveman speak in interesting prose, usually with an upper-class English accent.

If they are able to fit in, then it is Like a Duck Takes to Water.

Note that the redirect title, "Freezetta Man", is a play on Frazetta Man, which is a certain type of caveman.