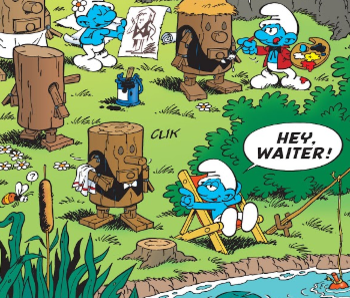 "We live to serve."
— Homo servus, The Draka
Advertisement:

A race specifically created to serve another. Robots are by far the most common in sci-fi versions and the biggest subtrope.

Some races will be happy with their situation, some will be actively loathing their masters. Since they usually possess a certain amount of inherent loyalty they are generally treated better than a Slave Race. They might be created with special limitations that prevent that they turn against their masters. If not then they might eventually be subject to a liberation movement, however, this might be tricky as they do not have roots they can go back to like the Slave Race does. (Although Servant races that have existed for a while might have developed their own culture.)

May have some overlap with Henchmen Race, Beautiful Slave Girl, and Clone Army. While we do not have any real world examples, there are some disturbing parallels in history when groups of people have claimed that certain human races were intended by a higher power as this.