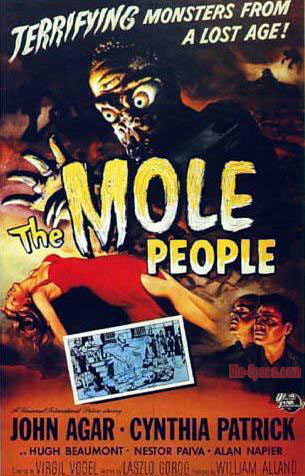 The Mole People is a 1956 black-and-white sci-fi movie starring John Agar and Hugh Beaumont as archaeologists searching for remnants of the Sumerian civilization. After a monologue by an English professor essentially Lampshade Hanging that the movie is fiction, we're brought to unspecified Asia (probably the Himalayas) where the search is ongoing.

Unfortunately, an earthquake destroys the oldest extant record, but lo! The earthquake has also dislodged a fresh relic which a Sherpa boy dutifully brings the heroes.

The heroes, along with assistant Lafarge and a helpful guide, head for the top of a huge mountain, where they find a ruined city. Unfortunately, disaster strikes and one of the archaeologists plummets through a trap door to his death. To rescue him, everyone heads into the chasm opened up, but the rappelling process leads to another death and a cave-in.

It's thought that the remaining three are doomed, utterly doomed, but it turns out there's fresh air. The remaining passageway leads them to the underground city of the Sumerians. Said city is also populated by the eponymous Mole People, who are forced into labor for the Sumerians.

But what other secrets await? It turns out that the Mole People are not too happy about their fate, and also...there happens to be a beautiful blonde woman trapped in here, who is sort of an outcast. Can the intrepid scientists escape? Can Agar ever shut up? And will anyone find out the existence of the Sumerians?

For the Mystery Science Theater 3000 version, please go to the episode recap page. Fans of MST3K will recognize The Mole People story writer Laszlo Gorog as co-writer of Earth vs. the Spider.