Film / Earth vs. the Spider 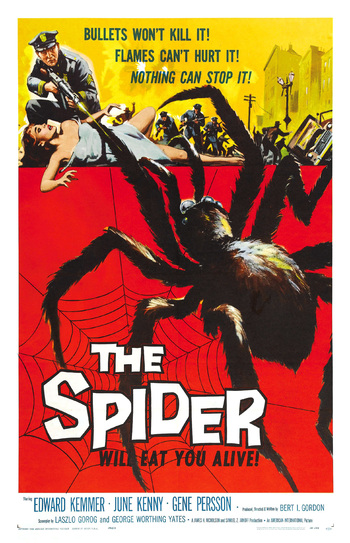 Earth vs. the Spider (also known as The Spider and Earth vs. the Giant Spider) is a 1958 American International Pictures black and white Sci-Fi Horror film produced and directed by Bert I. Gordon, who also wrote the story on which the screenplay by George Worthing Yates and Laszlo Gorog is based. It stars Ed Kemmer, Eugene Persson and June Kenney.

The film is about a giant spider terrorizing a town as well as teenagers and other 1950s things.

The name is also shared by a 2001 horror movie, made as a tribute to the original, though this version can also be seen something of a Darker and Edgier Deconstruction of Spider-Man. The tribute revolves around a comic-book-loving security guard at a lab that does genetic modification research on spiders. When his partner is killed, he deliberately infuses himself with spider DNA in hopes of becoming like his favorite super-hero. Instead, he is warped into a grotesque hybrid of human and spider traits and is consumed by an insatiable appetite for human flesh, voraciously eating person after person until a police officer manages to shoot him before he can snack on the girl he had a crush on.

Earth Vs The Spider contains the following tropes: