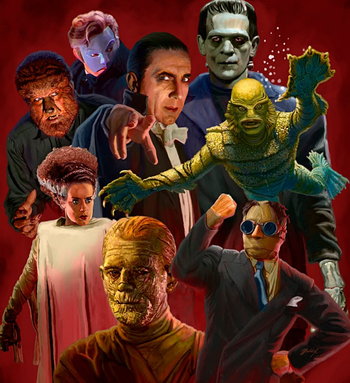 Back in the day, Universal Pictures was a minor film studio of modest means, looking to stand out from its competition. Their solution? Create some of the most classic and enduring horror movie icons in history.

Universal first dabbled in the horror genre in 1913 with Dr. Jekyll and Mr. Hyde (starring King Baggot) and The Werewolf, the latter of which is a lost film. The next year it made The White Wolf, which is another lost werewolf film. The studio's first two hit horror films were the 1923 adaptation of The Hunchback of Notre Dame and its 1925 adaptation of The Phantom of the Opera, both starring Lon Chaney. A string of successful silent films with German expressionist director Paul Leni and actor Conrad Veidt followed before Universal came roaring into the "talkie" era in 1931 with two movies: Frankenstein and Dracula. These two films were smash hits that laid the foundation for the modern horror genre, helped to establish Universal as a studio to be respected, and made leading men out of their respective stars, Boris Karloff and Bela Lugosi. Universal followed this up with The Mummy in 1932, The Invisible Man in 1933, and a trilogy of movies based on the works of Edgar Allan Poe (Murders in the Rue Morgue, The Black Cat and The Raven), as well as sequels to its 1931 giants: Bride of Frankenstein and Dracula's Daughter.

Universal took time off from making horror movies in the late 1930s due to the initial impact of The Hays Code. The studio's return to fright came in 1939 with Son of Frankenstein and hit the next high note in 1941 with The Wolf Man, starring Lon Chaney Jr.. At this point, Universal was well into the sequel and remake game of their key properties. Possibly inspired by the "The Three Horror Men" marketing tactic of RKO Pictures's 1940 You'll Find Out, the first monster crossover hit the screen in 1943 with Frankenstein Meets the Wolf Man. That same year, a much bigger Monster Mash to be known as Chamber of Horrors was announced, which ended up as the fun but decidedly less ambitious House of Frankenstein. House of Dracula followed, with the crossovers culminating in Abbott and Costello Meet Frankenstein, an Affectionate Parody of the horror genre and the first of a series in which Abbott and Costello have all kinds of encounters, some of which involving other Universal monsters.

Universal did try to set up brand new monsters in the 1940s, but after near-continuous losses in the 1930s, budget considerations made the cookie-cutter B-Movie the favored option. 1943's The Mad Ghoul stands out as one of the few horror movies not to receive a sequel, but this isn't for lack of trying. The Mad Ghoul himself was announced to be part of the Chamber of Horrors crossover, but didn't make it into the final product. 1943 also premiered Captive Wild Woman, the first of an eventual trilogy. Captive Wild Woman in particular is a product of the wartime female-centric cinema and the series as a whole is the only one in the Universal line-up to focus on a female monster. In 1944, the Sherlock Holmes film The Pearl of Death brought about a horror series Spin-Off centered on the Creeper as played by Rondo Hatton. And from 1943 to 1945, the Inner Sanctum Mysteries name was licensed for the production of six films, starring Lon Chaney Jr. as leading man and David Hoffman as the Horror Host of the series.

The horror genre entered another period of dormancy in the late 1940s; this time without a clear culprit. Proposed explanations include the desire for normalcy in the post-war era, staleness and oversaturation of the genre, and a shift to Film Noir as the new source of gloom and thrills. As with the first dormancy, horror returned just before the turn of the decade. Classic horror was done away with in favor of alien invaders, big critters, nuclear trouble, and prehistoric remnants rearing their heads. The latter concept came about due to the long-awaited discovery of the coelacanth in 1952 and is the thought behind Universal's final iconic horror film: Creature from the Black Lagoon in 1954. Other films of note from this era are This Island Earth in 1955, The Mole People in 1956, and Monster on the Campus in 1958.

A move critical to the franchise occurred in 1957 when Universal teamed up with Columbia Pictures to distribute their film catalogue up to August 1948 to television networks in themed packages. Shock! (1957) and Son of Shock (1958) were the horror offering and they were a massive hit, kickstarting the Horror Boom of the 1960s. This is when Universal Horror as a franchise was established and the Monster Mash was codified. Universal responded with a sharp turn back to classic horror shortly before stopping horror production altogether. Rather, in the late 1950s, the British Hammer Film Productions began making movies based on the same material Universal worked with prior. Universal arranged to be the distributor of these films in America.

In the decades following, Universal has from time to time made new material based on their key properties. They did a remake of Dracula in 1979, starring Frank Langella and Sir Laurence Olivier, and at the Turn of the Millennium they remade The Mummy (1932) as a series of action movies known as The Mummy Trilogy. They reunited the Wolf Man, Dracula, and Frankenstein's monster for the 2004 Summer Blockbuster Van Helsing, and did a remake of The Wolf Man in 2010, starring Benicio del Toro and Sir Anthony Hopkins. Finally, Universal's theme parks in Orlando and Hollywood have a reputation across America for throwing some of the biggest Halloween celebrations around.

Universal Horror represents one of the earliest attempts at a shared movie universe. Through sequels, its Dracula, Frankenstein, and Wolf Man movies were established as sharing a loose continuity, which in turn codified the Überwald trope. Via the Abbott and Costello film series, the Invisible Mannote Notwithstanding that the Invisible Man movies are set in a number of different continuities. and the Mummynote The version from The Mummy's Hand and its sequels, not from the original The Mummy (1932). were also added to this shared universe. During the 1960s Horror Boom, these five classic Universal monsters and the then-new Creature from the Black Lagoon were treated as a package deal for purposes of homage and satire. Decades later, Universal gave its official stamp of approval to these six classic monsters — Count Dracula, Frankenstein's Monster, the Mummy, the Invisible Man, the Wolf Man, and Gill Man — by releasing a Legacy collection for each as a way of promoting Van Helsing.

Due to the successes of The Mummy Trilogy and Van Helsing, as well as the example set by the Marvel Cinematic Universe, Universal went to work setting up a new, rebooted Universal Horror universe under the name of the Dark Universe. 2014's Dracula Untold was intended to be the first film in this shared setting, but its underperformance caused it to be scrapped from continuity and 2017's The Mummy (2017) was set to become the new first film. It bombed even more spectacularly than Dracula Untold and the plans for the Dark Universe were subsequently shelved. The Invisible Man (2020), made by Blumhouse and distributed by Universal in 2020, was produced and marketed as a standalone film. It was the first time since Van Helsing that a Universal Horror movie did well in the box office.

A large number of Horror Tropes were made, codified, and employed by these movies, particularly those pertaining to the so-called "classic movie monsters" — vampires, werewolves, mummies, etc. The modern images of said monsters were more or less created by Universal, to the point where deviations from their classic blueprints are still regarded as subversions of the "traditional" rules surrounding them. Also, since the limitations of The Hays Code meant that Universal couldn't rely on graphic violence and sex to frighten and titillate viewers, they remain a great way to introduce younger or more squeamish viewers to horror — which is exactly what they did once TV stations started using them as late-night movies in the 1950s.