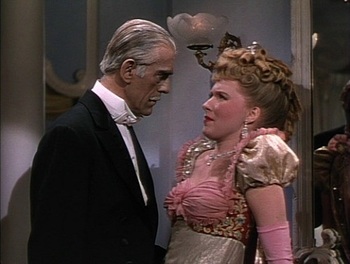 The Climax is a horror film produced by Universal Pictures, first released in the United States in 1944. the film stars Boris Karloff, Susanna Foster, and Turhan Bey.

Dr. Hohner (Karloff), theatre physician at the Vienna Royal Theatre, murders his mistress, the star soprano when his jealousy drives him to the point of mad obsession. Ten years later, another young singer (Foster) reminds Hohner of the late diva, and his old mania kicks in. Hohner wants to prevent her from singing for anyone but him, even if it means silencing her forever.