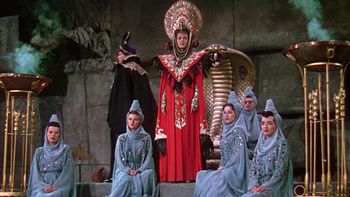 The Cobra Queen and her handmaidens
Cobra Woman is a 1944 adventure film directed by Robert Siodmak.
Advertisement:

On the exotic South-Asian island of Harbour Island, Ramu and Tollea prepare to wed with the help of their friend Kado. However, before the marriage can take place, Tollea is kidnapped by the evil twin she didn't know she had and carried off to Cobra Island whose horrors top the nightmares of a drug-soaked brain. It turns out that Tollea's sister, Naja, is the despotic queen of the Island and high priestess of the cobra god. She also likes to feed people to the local volcano, and she hasn't had Tollea kidnapped for the sake of sisterly bonding. Rau and Kado must save her.

Notable as a minor Camp classic.

This Film Contains The Following Tropes: