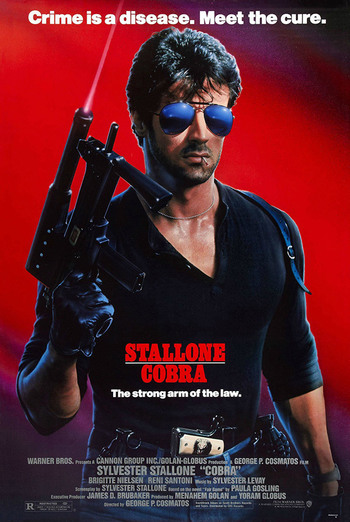 Cobra is a 1986 action film starring Sylvester Stallone, produced by Warner Bros. in association with The Cannon Group.

Stallone stars as police Lieutenant Marion "Cobra" Cobretti, an intense, no-nonsense LA cop from the "Zombie Squad", who has to deal with a string of murders by a man known to police only as the Night Slasher (Brian Thompson), while also dealing with various murderous nuts spouting nonsense about a "New Order". As it turns out, the Night Slasher is actually the leader of this "New Order" cult. Model Ingrid Knudsen (Brigitte Nielsen) drives past one of their murders and sees the Night Slasher's face, making her the gang's prime target. She enters police custody for her own protection, under the watchful eye of Lt. Cobretti and his partner, the junk food-loving Sgt. Gonzales (Reni Santoni). Eventually, Cobra will have to use Ingrid as bait to draw out the Night Slasher and put an end to his menace once and for all.

Based (very very loosely) on Paula Gosling's novel Fair Game. Oddly enough, most of this movie came from ideas Stallone bandied about during the development of Beverly Hills Cop. Stallone was originally cast as protagonist Axel Foley, but back then Sly's strength was in action acting, not comedy. Stallone kept putting in more and more suggestions to put more action in Cop, but the suggestions got more and more expensive and outlandish, and kept pulling it away from the original tone as a cop comedy. Eventually the producers got the hint that Stallone wasn't a good fit, and recast an actual comedian, but by then Stallone had enough material (along with the novel's basic idea) to weave together the script to Cobra. Sly also got the bright idea to re-release the novel Fair Game, but with Stallone's ideas woven in, and all Gosling had to do was agree to give Sly co-author credit. Oddly enough, she declined. It would be nine years later when another adaptation under that title starring William Baldwin and Cindy Crawford (in, roughly, the roles Stallone and Nielsen are in this movie) would make it to theaters. All three versions bear very little resemblance to each other.