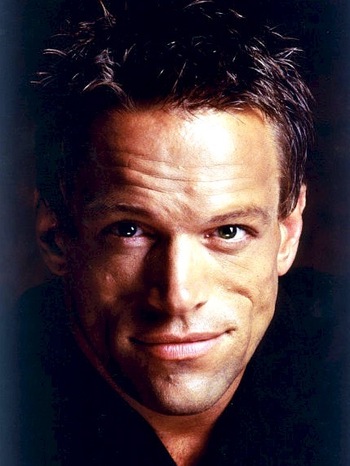 "Sure, I do wish I sometimes got to play more heroes, but hey, I can't beat the fact that I am working constantly. Anyway, look at me. I'm six-four, three feet wide, have a really deep voice, and this face; I'm not precisely the romantic comedy stereotype, right?"
— Brian Thompson
Advertisement:

Brian Earl Thompson (born August 28, 1959 in Ellensburg, Washington) is a veteran character actor who has made a career out of playing Mooks, Serial Killers, Dirty Cops, Mad Bombers, Implacable Men, Black Knights, Juggernauts, Dimension Lords, Evil Overlords, and an entire host of Dragons—and that's not to mention his one appearance as an Eldritch Abomination. He even played a Noble Demon once.

And, on the very rare occasions where he has been allowed to go beyond his rough exterior, he's turned in amazingly thoughtful and sensitive performances as brave, inspiring, and truly noble good guys.

A native of Ellensburg, Washington (the same area where Northern Exposure would later be filmed), he was a high school jock whose interest in acting was sparked when, during his senior year, he was cast as the Russian ballet instructor Boris in the comedy "You Can't Take it With You". Under the pretense of attending Central Washington University to play football and study business management, he quietly auditioned for every available production he could reach.

His very first film role was in The Terminator, where he played the eponymous killing machine's first victim in the modern day. About a year after Arnold Schwarzenegger stole Thompson's clothes, Sylvester Stallone wanted a crack at Brian Thompson as well when he was cast as the main villain in Stallone's Cobra (wherein Thompson was impaled on a meat hook then burned alive). This began a string of credits that has left Thompson in and around some of Hollywood's biggest and best projects, including Hercules: The Legendary Journeys, Weird Science, The X-Files, Buffy the Vampire Slayer, Chuck, Charmed (1998), Moonlighting, Knight Rider, ¡Three Amigos!, Alien Nation, Star Trek: The Next Generation, Walker, Texas Ranger, NCIS, and many, many, many more.

Most of those roles were as villains, or at least as semi-antagonistic tough guys. His first heroic role was as the surprisingly spiritual Sheriff Cody Johnson in the short-lived 1993 Fox comedy Key West, where Thompson's understated portrayal of a modern-day Knight in Shining Armor was often cited as one of the best things about the show. He also played the title hero of 1999's Conan the Librarian, a PBS special wherein he encouraged kids to read.

In addition to his acting chops, Brian Thompson is a dedicated wind-surfer, a black belt in Hapkido, a trained classical pianist, and an expert sushi chef. While filming on location for Key West, he fell in love with the titular island, and now lives there full-time with his family.