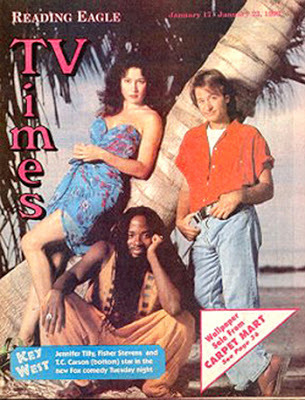 "I guess dat mean you plannin' on staying wid us a while... Now what dat car do to you? You find dat car in bed with you woman? You fine da clues? Oil drippin's on you bedsheet? Maybe you killed da wrong car, mon. Look at him, dead and bleedin' in da ocean over dere. But... now I'm lookin' hard wid dese flame-torn eyes, and I'm saying to mysef, Jo Jo... my name really Abegnego but everybody call me Jo Jo I don't know why... Jo Jo, maybe dis man done drove dis car all the way down here, to de End of de World, and killed his car, so he can never go home again..."
— Jo Jo Nabouli, after witnessing Seamus O'Neill drive his car into the surf, then execute it with a .44 magnum, in the opening minutes of the Pilot Episode
Advertisement:

Magical Realism has a dodgy history on American television, with more shows claiming to be part of the genre than successfully using it for anything more than the occasional flakiness. Key West was a successful, serious attempt to embrace this chimeric genre, an accomplishment all the more impressive in light of the fact that it managed a consistent strong showing in only 13 episodes in 1993 on FOX. It was well written, intelligent, slightly surreal with engaging characters, and a cast that meshed together with natural chemistry.

Naturally, with all that going for it, the show never had a chance.

The setup was that Seamus O'Neill was a factory worker who won the lottery and decided to engage his inner Hemingway and move to Key West to become a writer. However Key West, as the name implies, was as much about the place and its magical atmosphere as it was the characters inhabiting it. Like a lot of Latin American Magical Realism which takes cues from Gabriel García Márquez's One Hundred Years of Solitude, the place has a sense of existing in its own time as well as space, as seen in the ambiguity of its Arc Words: "The end of the world".

Episodes in which the magical realism is most visually apparent are "The Second Day in Heaven", "The Great Unknown", "Act of God", "Crossroads" and "The System", although virtually every episode in some way embraced the dismantling of everyday reality.

Its large ensemble cast — headed up by Fisher Stevens, Jennifer Tilly, Leland Crooke, Denise Crosby and Brian Thompson — was remarkable for its consistency and earnestness (Thompson and Tilly in particular).