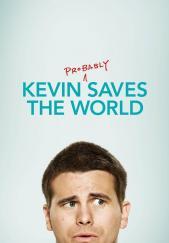 Let's hope he does.
Advertisement:

Kevin Finn recently tried to kill himself. After surviving the attempt, the down on his luck guy crashes with his recently widowed sister Amy, and her moody teenage daughter Reese. But before his first night even ends, Kevin meets a strange woman named Yvette. Who just happens to be an angel.

Kevin has been chosen for a special job. To help her locate the 36 righteous souls that dwell on Earth.

She probably should have picked someone else...