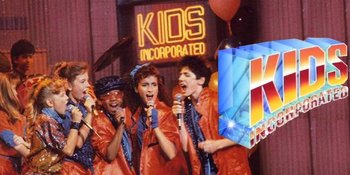 Long-running (1984-1993) children's musical show which started life in Syndication through Metro-Goldwyn-Mayer and ended up on the Disney Channel.

The series revolved around a literal five-man band (the number did inflate to six for two seasons) of children and teenagers who encountered a very random assortment of plots. Most of these were standard After-School Teen Drama stories. Every so often, however, they'd face a more outlandish adventure involving Time Travel, magic robots, Leprechauns and other, crazier things. Whatever the story involved, it'd always be punctuated by often-Bowdlerized covers of popular songs.

The show was formulaic in nature: with only a few exceptions (a few all-musical "concert episodes", and once featuring kid break-dancers competing for a Karaoke Machine), each episode began with the band performing a number on-stage at "The P*lace", a local hangout with an illustrious history. (It had once been called "The Palace", and was renamed after the 'a' in the marquee had burned out.) After this, a short scene would set up the plot before the band returned to the stage to perform a second number. As the plot unfolded, two more songs would be performed off-stage, usually one solo number by whichever member of the cast was spotlighted that week (which in almost all cases is a slow ballad or love song), and one song worked into a Dream Sequence or Imagine Spot. In the final minutes, the plot would be resolved, and the band would perform a closing number on-stage, sometimes accompanied by a Montage Out of the guest characters. The third and fourth songs were always directly relevant to the plot (for example, a cover of "As Time Goes By" during a Casablanca-themed Dream Sequence), the second and fifth songs were usually linked no more than thematically, while the first number was generally unrelated to the action of the story (The final season dropped the second song for three extra minutes of dialog).

The show's longevity (it predated the Disney Channel's policy of imposing a 65-episode limit), despite being aired during a period when the Disney Channel was a commercial-free premium station, is taken by fans as evidence of the quality of writing and acting. The show launched the careers of Stacy Ferguson (aka Fergie, of The Black Eyed Peas), Mario Lopez (of Saved by the Bell), Scott Wolf (of Party of Five), Eric Balfour (of 24 and Haven), and Jennifer Love Hewitt, then only credited by her middle name. Note that the cast swapped people in and out nearly every season. So by the time the show ended, the titular fictional band was an entirely different group of people from where they started!

The show has had a very convoluted production and broadcast history. During the show's first season, MGM distributed and co-produced the show alongside Lynch-Biller Productions, the production company of executive producers Thomas W. Lynch and Gary P. Biller, and K-Tel Entertainment, a music company best known for producing compilation albums advertised on television which could only be purchased through direct-response mail order by calling a toll-free number. After the first season ended, however, K-Tel filed for chapter 11 bankruptcy protection and Hal Roach Studios, which, coincidentally, had previously collaborated with MGM on The Little Rascals and Laurel and Hardy, took K-Tel's place. At the conclusion of the second season, the show was cancelled from syndication due to low ratings. This was largely due to shuffling time slots from the local television stations that carried the show. However, reruns were picked up by CBN and they received positive ratings which convinced Disney Channel to put the show back into production. In addition to resuming production with new episodes and using the same cast, Disney's buyout package also included the entire syndicated run. As a result, edits were made to remove fee plugs and commercial outros. After the fourth season, HRS merged with RHI Entertainment and the combined company was named Quintex after an Australian media company of the same name which had purchased a share in the new venture. The show temporarily went on hiatus after the sixth season in 1989, and returned in 1991. By this time, in addition to a major cast overhaul, Quintex had also filed for bankruptcy and RHI acquired their assets. Also during this time, Biller sold his share of Lynch-Biller Productions back to Lynch, and the company was renamed Lynch Entertainment. This continued until 1993, when the show was unofficially cancelled.

Four platinum-selling albums of cover tracks by the cast and produced by K-Tel were released while the show was still in syndication. No further albums were made with the move to Disney, however, due to K-Tel's aforementioned bankruptcy.

Now has a Recap page in progress.