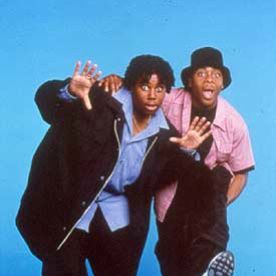 In what would become a recurring theme among the show's alumni, Kenan Thompson and Kel Mitchell were such a big hit on Nickelodeon's variety show All That that they were given their own TV show. Set in Chicago, the sitcom chronicled the misadventures of ambitious Kenan Rockmore and dimwitted Kel Kimble. Kenan & Kel aired from 1996 to 2000 (it should be noted that three years after the show's end, Kenan Thompson would be a cast member on Saturday Night Live).

Not to be confused with the webcomic Kevin & Kell.

Kel, grab a picket fence, a minigun, and The Power of Love and meet me at the Other Wiki! Now come on... Tropey

Kenan?! How am I supposed to get a picket fence?! The other wiki, I don't even know about the first wiki! And who can I get the power of love from? Isn't that the crazy future song?! KE-KENAN?!?! AWWWWWW, HERE IT GOES.