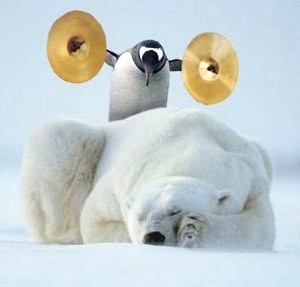 He just wants to wake him up so he can ask for directions.
"Well, I'm down in the bay with the Eskimos
With the polar bears and the Arctic snows
With a party of penguins who do not know
How I can get back to thee."
— Nick Cave & The Bad Seeds, Supernaturally
Advertisement:

The primary difference between the Arctic and the Antarctic is that one has polar bears and one has penguins — if you're lucky enough not to see them in the same place or one of them in the wrong place. Oh, and they're on opposite ends of the Earth, but who can remember which one is where? Certainly not Hollywood, which treats them as interchangeable lumps of ice to send doomed expeditions up. The (Ant)Arctic circle is full of snow, chasms, avalanches and those great big ice bridges that collapse just as the last person makes their way across. Cannibalism may be unavoidable. If one is lucky (or unlucky) you might find that weird hidden tropical valley filled with... interesting denizens.

In Christmas Specials, children's cartoons and comics, there will literally be a South or North Pole that looks just like the striped poles outside barbers' shopsnote Actually, a short walk from the real South Pole is a "ceremonial" South Pole that really does look like a barber's pole; nothing similar has been placed at the North Pole because it's in the middle of the ocean. Christmas Elves, reindeer and Santa Claus will no doubt be somewhere nearby, at least in the case of the North Pole. In these cases, the cannibalism rule can be waived, although, in a comedy, the word "venison" is a guarantee.

For the record, the North Pole is a frozen sea and the South Pole is an actual frozen continent, but that doesn't come up much either. If it did, we might start wonderingnote Heh, fridge... why Santa built his house not on a rock, but on a floating mass of ice.note The north magnetic pole, however, is mostly located in northern Canada (it's been drifting back to the geographical north over time), which can be used as a handwave. After all, when you send mail to Santa Claus, you send it to Canada, postal code H0H 0H0 — although some say he lives in the Lapland region of Finland, which is, if not in the Polar Artic Circle, is pretty damn close.

Incidentally, the word "Arctic" actually comes from the Greek word for bear, Arktos. This is in origin nothing to do with polar bears, but refers to the constellations Ursa Major and Ursa Minor (the great and the small bear, respectively), which are always in the north as seen from Greece. However, it makes for a convenient mnemonic — the Arctic is the land of the bears, the Antarctic is the land opposite the bears.

Of course, it's probably just easier to remember NORTH IS BEARS, SOUTH IS PENGUINS. Had early Germanic peoples not been afraid to name bears, we might have had a mnemonic like "Polar orths* Alternate Universe Modern English *orth from AU Old English *orþ from AU Proto-Germanic *urþaz live up north."

May be explained by the fact that Everything's Better with Penguins. Then again, Bears Are Bad News, so the penguins might just balance things out. On the other hand, the bears may also be Beary Funny, in which case both bears and penguins make for a real cool Rule of Funny. Compare All Deserts Have Cacti, the warmer counterpart of this trope.

No Real Life Examples, Please! note While the extinct Great Auk, another flightless black-and-white seabird, did live in the arctic, it was not related to penguins, and therefore does not count as a real-life example of this trope. Penguins were however named after the Great Auk (which was nicknamed "Penguin" for uncertain reasons and had the scientific name Pinguinus impennis) due to their superficial resemblance.