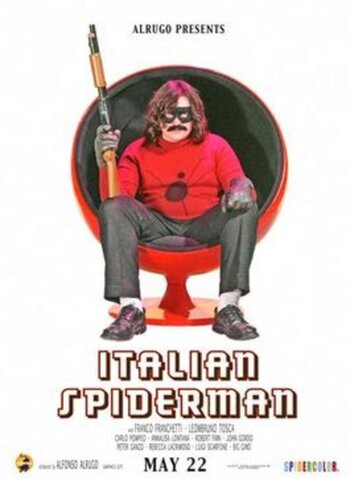 Italian Spiderman is a parody of foreign knockoffs of American superheroes; its name is inspired by existing nicknames for such things as Turkish Star Wars and Italian Batman. (Though it should be mentioned that in this case, it's accurate. His name is Italian Spiderman.) It began as a trailer for a nonexistent film, made by Australian Dario Russo for his senior finals. Uploaded to Youtube in November 2007,

it became a cult hit and was expanded into ten short films.

The plot involves an asteroid falling to earth. It is experimented on by Professor Bernardi, who develops the power of cloning from it. He gives it to Italian Spiderman, an overweight chain smoking brute, for safekeeping from the evil Captain Maximum. What follows are a series of chases, brawls, gunfights, and a surfing contest, none of which have much to do with anything.

Italian Spiderman is shot in 16mm, similar to B movies of the late '60s. The dialogue was dubbed sloppily into Italian and given English subtitles. Large amounts of stock footage are used, in completely inappropriate places. As part of its promotion, a fictional history of its production company, Alrugo, was created, and placed on its website.

The series can be viewed here,

or as a complete (and uncut!) film here.

Plans to continue the series on Australian Network SBS proved unfruitful. Instead a new series, Danger 5, was created.

Not to be confused with the Japanese Spider-Man, which was a real (officially licensed by Marvel) show, believe it or not.