Web Video / The Isle of Rangoon 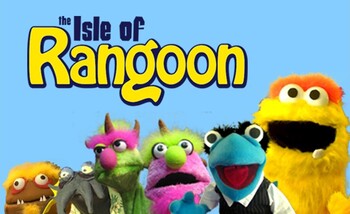 The Isle of Rangoon

is a web riff/review puppet series created by Greg Sepelak and Trent Troop. The main series centers around Starchibald and Sunny Jim, two "Rangoons" (puppet creature things from the titular isle) reviewing cheap movies and riffing on public domain shorts, the latter of which are frequently forced on them by the faceless "Mysterious Malefactor". Also present are recurring characters like Trent the Human (Starch's long-suffering roommate) Zeus (deliverer of many a Deus ex Machina), and Old Man Cthulhu (a crotchety Elder God who spends his days answering your questions).

They are affiliated with RT Gomer Productions and The Rosen Hacker.

The Isle of Rangoon provides examples of: