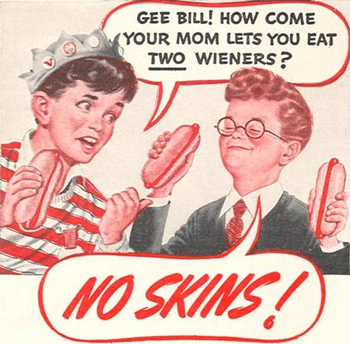 As frequently as some commercials appear on TV, it's hard not to get these phrases stuck in your head. Simples! *squeaking noise*

The role of Memetic Mutation in advertising is unique because Memetic Mutation is actually advertising's job. Advertising is supposed to get you to buy something. So advertisers try to make the ads memorable so that you will be influenced to buy the product. And also to get you to tell your friends about the cool product or funny ad. (Viral Marketing is just one way of doing this.) However, sometimes this can backfire if the ad is memorable enough in a bad way that it is actually deterrent. Even then, some will still buy the product ironically because of the meme or out of Bile Fascination. This can also backfire when people remember the ad but not the product.

open/close all folders
Billboards and Signs
There's that famous
Roadside meme
Created by
A shaving cream
Burma-Shave Explanation From the 1920s to the 1960s Burma-Shave had sequences of billboards placed along roads, which you'd read as you drove along. There are four to eight, with the last reading "Burma-Shave", and usually they rhymed.
Cars
Drinks
Advertisement:
Electronics
Food
Games and Toys
Infomercials
Medicine and Beauty Care
Money and Insurance
PSAs/PIFs
Retailers
Other