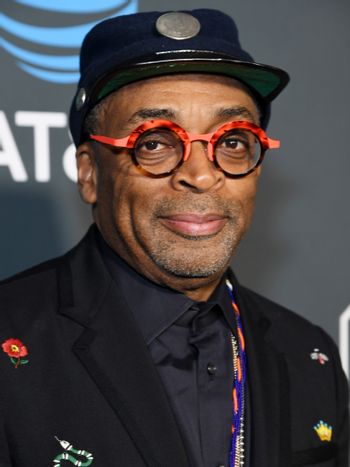 "I'm just trying to tell a good story and make thought-provoking, entertaining films. I just try and draw upon the great culture we have as a people, from music, novels, the streets."
Advertisement:

A renowned film director, producer, screenwriter, and actor famous for dealing with controversial issues such as racism, politics, and urban violence in his films. Lee has received five Academy Award nominations with one win (Best Adapted Screenplay in 2019 for BlacKkKlansman), a Student Academy Award and an Academy Honorary Award from the Academy of Motion Picture Arts and Sciences, and won numerous other awards, including an Emmy Award and the 2013 Gish Prize.

A Brooklyn native, Lee made his directorial debut with the 1983 independent film Joe's Bed-Stuy Barbershop: We Cut Heads, with his first feature film, She's Gotta Have It, being released in 1986. He has since directed such films as Do the Right Thing, Malcolm X, Summer of Sam, 25th Hour, Inside Man, and most recently BlacKkKlansman. Lee's films are typically referred to as "Spike Lee Joints" and the closing credits always end with the phrases "By Any Means Necessary", "Ya Dig" and "Sho Nuff".

Lee's film Do the Right Thing was nominated for an Academy Award for Best Original Screenplay in 1989. In 2006, he also directed the acclaimed documentary, When the Levees Broke, which detailed life in New Orleans after Hurricane Katrina destroyed the city's anti-flooding safeguards in 2005. In 2013, he was chosen to direct an English-language remake of the South Korean thriller Oldboy.

Lee has starred or acted in ten of his own films. He played the lead role of Mookie in Do the Right Thing and major supporting roles in Malcolm X, Girl 6, and Mo Better Blues. He reprised the role of Mars Blackmon from She's Gotta Have It for a series of Nike commercials also starring Michael Jordan.

Famously attributed with coining the name for the "Magical Negro" trope.

Is the Sitcom Arch-Nemesis of Quentin Tarantino, whom Lee has clashed with over his films' use of a certain word.

Don't mix him up with Spike Jonze.