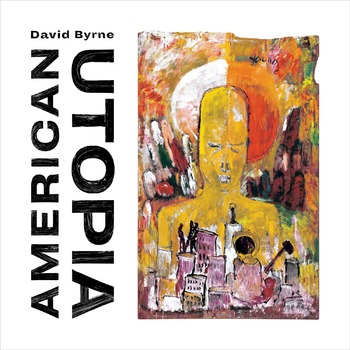 "We're only tourists, but the view is nice."
"I have no prescriptions or surefire answers, but I sense that I am not the only one looking and asking, wondering and still holding onto some tiny bit of hope, unwilling to succumb entirely to despair or cynicism."
—David Byrne in the album's liner notes
Advertisement:

Created as a part of Byrne's wider "Reasons to Be Cheerful" project, which examines the perseverance of optimism in the face of the increasing bleakness of the world during the early 21st century (a concept stretching back to 2008's Everything That Happens Will Happen Today), the album melds together Byrne's trademark leftfield brand of world-infused art pop and the thudding electropop that rose to prominence over the course of the past two decades. True to the project, the album covers themes of optimism and a hope for the betterment of the United States and the search to truly fulfill the idea of all men being as equal as they are in creation.

Production-wise, the album sees Byrne working with recurring collaborator Brian Eno again for the first time since Everything That Happens Will Happen Today ten years prior, and marks Byrne's first collaboration with Eno to feature the latter as just a producer rather than a co-musician since Talking Heads' landmark album Remain in Light all the way back in 1980. Scottish indie producer Rodaidh McDonald also provides co-production duties alongside Byrne himself, with the union of the three's musical preferences resulting in a unique modernization of Byrne's Signature Style.

The end result was Byrne's biggest commercial success since his Talking Heads days: debuting and peaking at No. 3 on the Billboard 200, it was his first solo record to enter the top ten, further topping Billboard's Top Rock Albums chart and becoming the 74th best-selling album of 2018. Promoting the album also brought Byrne back into the mainstream limelight after decades of sitting comfortably as a cult hit post-Talking Heads, with Byrne appearing at the Coachella 2018 festival, conducting both an expansive US tour and a Broadway show over the course of 2018 and 2019, and performing on Saturday Night Live at the start of 2020 (his first appearance on the show since 1989, his second appearance there as a solo artist, and his third overall). A Concert Film based on the tour, directed by Spike Lee, debuted in late 2020, marking Byrne's first concert film since the Direct to Video Between the Teeth — Live in 1993 and his first theatrical concert film since Stop Making Sense in 1984 (acting as a Spiritual Successor to both).

American Utopia was supported by one single: a digital-only release of "Everybody's Coming to My House".

There's only one way to trope a flower, but there's millions of ways to be free