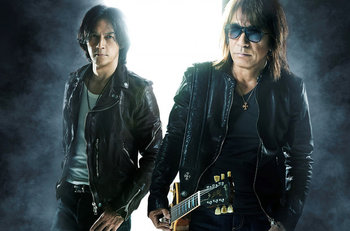 B'z are a Japanese rock duo, consisting of guitarist, composer and producer Takahiro "Tak" Matsumoto and vocalist and lyricist Koshi Inaba, known for their energetic hard rock tracks and pop rock ballads. Born at the end of The '80s as a J-Pop band, B'z gradually became a proper Rock band during The '90s and got their recognition during this decade and the 2000s, being active until today. B'z is considered as one of the major rock bands in Japan along with Mr.Children, X Japan and Glay, as well one of the biggest rock bands in all Asia. Also, they're the first Asian band to be in Hollywood's RockWalk, induced on November 2007.

Even when they are very famous in USA, Western fans know them for their songs for various anime series (Case Closed, Hell Teacher Nube, Fist of the North Star, Black Jack), video games (Burnout, Dragon's Dogma, Yakuza and various rhythm games), TV Dorama series and even as ending songs for US series' Japanese dubs (The X-Files, The O.C.).

. Not to mention they have their own wiki

Are you ready to TROOOOOOPE?!