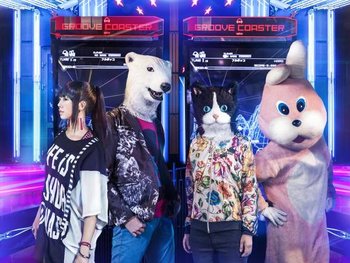 Left to right: Ranko the human, Comp the polar bear, Paprika the cat and Ranko no Ane the pink rabbit
Advertisement:

Butaotome (meaning "Pig Girl", stylized as "BUTAOTOME") is a doujin music circle. It was founded in Autumn 2009 by four drinking buddies who "wanted to do something fun". They started uploading stuff on niconico in November — first cover songs, then their own Touhou Project arrangements. They published their first album, Touhou Kaiten Mokuba, in March 2010. Since then, they've participated in every Comiket and Reitaisai and brought at least one new release each time.

Their main type of work is vocal Touhou arrangements characterized by the J-pop/rock sound provided by Comp, Ranko's powerful vocals and Paprika's piano, but they also like to experiment. Ranko's older sister, Ranko no Ane, is the circle's designer. For most albums, the four members created and produced everything. Paprika left the circle in 2020, but the remaining members kept going.

Paprika released the 20 Touhou Nekokenban albums between August 2010 and May 2020. They were pure piano albums with instrumental renditions of Butaotome’s vocal songs at first, but became more experimental as the series went on.

The circle also releases original albums and songs, which tend to keep their "standard" sound. Their first five original albums were doujinshi. They released their first commercial album, Furubokko, under Avex Trax in March 2017.

Some of their songs have appeared in Rhythm Games like maimai, CHUNITHM, Sound Voltex, Groove Coaster and jubeat.

They've released too many albums to list them all here, but the English fansite Tiramisu Cowboy

as well as plenty of in-depth information.

This music circle provides examples of: