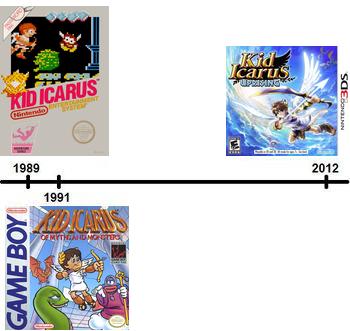 "Sorry to keep you waiting!"
"Welcome to Team Fortress 2. After 9 years in development, hopefully it will have been worth the wait."
—Gabe Newell
Advertisement:

A film or other literary work where a sequel is released long, long after the original work. May sometimes be a Trilogy Creep, very often related to Development Hell.

More common in games, particularly online games, as they can have a much longer life than other forms of non-interactive media, which are "finished" as soon as you reach the end of them. StarCraft II, for example, came out 12 years after the original StarCraft because the original remained massively popular for a long, long time after its release.

Doesn't apply to sequels In Name Only, Sequel Series or Franchise Reboots. This trope is for honest-to-goodness sequels, prequels, and midquels. See also Capcom Sequel Stagnation, and a related Webcomic trope, Schedule Slip. Can overlap with Cliffhanger Wall if the last entry ended on a cliffhanger, but audiences only get a prequel or interquel after a long release gap. If the time passed in real life is reflected in the story, see Real-Time Timeskip.

Not to be confused with Distant Sequel, which is when a significant gap in time exists between a prequel and a sequel in-universe.

Note: In order to qualify as this trope, the sequel in question must have been released no less than five years after the previous installment.