Literature / Aristotle and Dante Discover the Secrets of the Universe 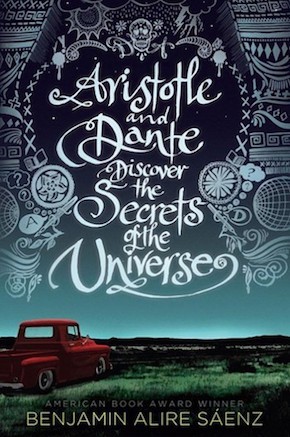 A coming of age novel by Benjamin Alire Sáenz, Aristotle and Dante Discover the Secrets of the Universe takes place in El Paso, Texas in 1987 and follows the life of 15 year old Aristotle Mendoza whose life changes when he meets Dante Quintana.
Advertisement:

Ari is an angry teen with a brother in prison. Dante is a know-it-all who has an unusual way of looking at the world. When the two meet at the swimming pool, they seem to have nothing in common. But as the loners start spending time together, they discover that they share a special friendship—the kind that changes lives and lasts a lifetime. And it is through this friendship that Ari and Dante will learn the most important truths about themselves and the kind of people they want to be.

The novel is told from Ari's point of view and focuses largely on his emotional struggles as he tries to figure out who his father was before Vietnam left him closed off, who his brother is now that his family refuses to acknowledge his existence, and who he is as someone who's not quite a boy and not quite a man.

The book was nominated for a Printz Award in 2013. A sequel, Aristotle and Dante Dive Into the Waters of the World, was released in October 2021. A film adaptation starring newcomers Max Pelayo and Reese Gonzales as the respective titular characters premiered at the 2022 Toronto International Film Festival.

Aristotle and Dante Discover the Tropes of the Universe: