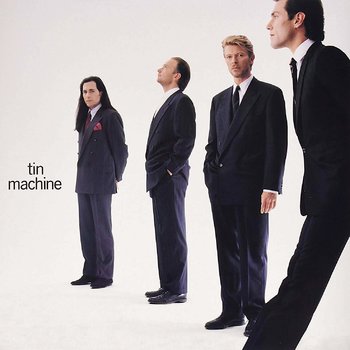 Tin Machine, released in 1989, is the eponymous debut studio album by British-American Alternative Rock supergroup Tin Machine, formed the year prior to help frontman David Bowie reinvigorate his artistic passion. Produced with a deliberately raw and improvisational style with little overdubbing, the album exerts a more Hard Rock-oriented sound that sharply contrasts most of the rest of Bowie's 80's output; guitarist Reeves Gabrels described it as the band "screaming to the world" and "a project that would put an end to rock 'n' roll." The album is also much more openly socially-conscious than Bowie's prior oeuvre, with "Under the God" scathingly criticizing social and institutional racism, neo-Nazism, and white supremacy.

The hard rock direction wasn't the main intention from the get-go: when Bowie and Gabrels originally convened to try and help the former rediscover his artistic muse, the two originally planned to take on an art rock-driven direction in the vein of Bowie's most famous works, to the point where Bowie re-recorded "Look Back in Anger" as a starting point. However, the duo's meeting with prior collaborators Tony and Hunt Sales (who'd previously performed alongside Bowie on Iggy Pop's supporting tour for The Idiot) led to the musician brothers orienting Bowie's new sessions in a harder direction, with Bowie drawing inspiration from The Pixies, a band he quickly grew to admire since their inception. The end result of this was the formation of Tin Machine and the recording of this abrasive, rage-driven album.

directed by Julian Temple was produced, featuring live performances of (in order) "Pretty Thing", "Tin Machine", "Prisoner of Love", "Crack City", "Bus Stop", "Video Crime", "I Can't Read", and "Working Class Hero" at the Ritz in New York City; Temple had previously directed Jazzin' for Blue Jean and the music videos for "Absolute Beginners" and "Day-In Day-Out". The video was not commercially released until May 22, 2019, when Parlophone Records uploaded it to Bowie's official YouTube video to commemorate the album's thirtieth anniversary.

Where this album ranks in Bowie's discography is... complicated. Contractually, it was a David Bowie album, and as such is included in the 1999 reissue campaign of the man's solo works, credited under Bowie's name. However, the members of Tin Machine considered themselves and the material they put out as a separate entity from Bowie's solo material. As such, it's hard to definitively say whether or not Tin Machine is its own thing or a part of the David Bowie release timeline. As a bit of a compromise, this wiki includes the album among Bowie's solo works on the "Creator" page (and will do the same for Tin Machine II if/when a page gets made for that), while the "Music" page places it and Tin Machine II in a separate category.

I've seen the best tropes of my generation laid out in cemeteries and crematories: