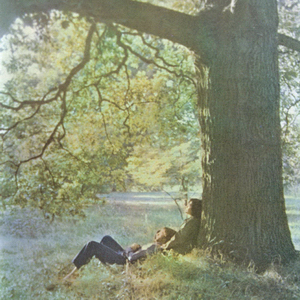 "As soon as you're born they make you feel small, by giving you no time instead of it all, till the pain is so big you feel nothing at all."
"One has to completely humiliate oneself to be what the Beatles were, and that's what I resent. I didn't know, I didn't foresee. It happened bit by bit, gradually, until this complete craziness is surrounding you, and you're doing exactly what you don't want to do with people you can't stand — the people you hated when you were ten... and that's what I'm saying on this album: 'I remember what it was all about now, you fuckers. Fuck you all... you don't get me twice'."
— John Lennon, Rolling Stone interview, 1970
Advertisement:

John Lennon/Plastic Ono Band, released in 1970, is the fourth studio album by John Lennon, and his first to be released following his departure from The Beatles. Compared to his three previous experimental albums - all collaborations with Yoko Ono, the more conventional songwriting approach of this one had a much better commercial and critical reception and is considered to be one of his finest albums (often his very finest). It's best remembered for "Mother", "Working Class Hero", "Love", and "God".

Notorious for its frank, raw lyrics and stripped-down sound, the album was essentially a showcase for Lennon to exorcise many of his personal demons, spurred on by the primal therapy sessions that he and Ono had attended earlier in 1970. Such topics included the singer's troubled youth, the hypocrisy of religion and belief systems, and his growing disillusionment with stardom and the music industry.