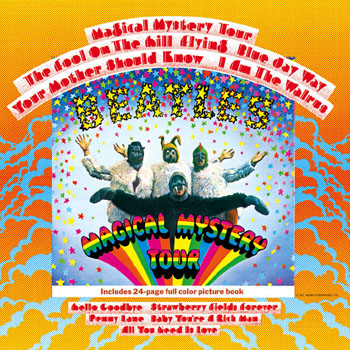 Roll up! Roll up for the Magical Mystery Tour! Step right this way!Original UK double-EP cover 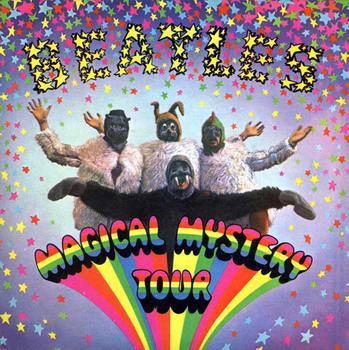 Magical Mystery Tour is the ninth studio album by The Beatles, released in 1967.

It began as the soundtrack for the film of the same name. This proved problematic, as the Magical Mystery Tour movie only had six songs, too few to make up an album. In the UK, it was decided to release it as a package with two extended play 45 RPM singles, with three songs on each disc. While this was a reasonable solution for the British market, where EPs were common, the EP 45 format had never really taken off in America. Capitol Records dealt with the dilemma by making MMT an album, padding it out by adding five songs that were previously released on singles in 1967, with the film soundtrack being Side One and the singles filling up Side Two (similar to how previous Beatles soundtrack albums were formatted in the UK).note "I Am the Walrus" was the B-Side of "Hello Goodbye", but since it's in the film too, it went onto Side One

In a rare case for Beatles releases (and 1960's British music as a whole), the US album has since become the definitive version of the release, owing largely to the greater number of tracks, including two ("Strawberry Fields Forever" and "Penny Lane") that were originally intended for Sgt. Pepper's Lonely Hearts Club Band; as British convention in the 1960's dictated that singles were not to be included on any studio albums, the inclusion of past singles on the American release helped made it feel more fleshed out without seeming redundant when put up against the band's UK studio albums.

After years as a popular import in Britain, the American album officially became the canonical version of the project when it was included as part of the 1987 Compact Disc reissue series, which had strictly featured the British studio albums up to that point. It was also the last Beatles album to have different British and American tracklistings. The final compilation album of non-album tracks for the U.S. market would be the Rarities compilation in 1980, which would eventually be superseded in 1988 by the Past Masters compilation.

Unlike the Magical Mystery Tour film, which was heavily criticised upon release, this album was an immediate critical and commercial success. This makes it an example of a Cult Soundtrack more popular than the film itself.

Troping in an English garden, waiting for the sun: