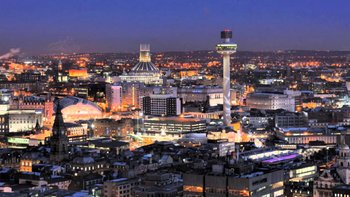 Liverpool is a major city in the north of England. The city limits (i.e. the council's domain) have a population of 496,000, while the wider urban area has a population of 860,000 and is the sixth-largest urban area in the UK (fifth in England). Liverpool is at the hub of the Merseyside area, which includes several outlying towns and the Wirral peninsula on the opposite side of the River Mersey.

Liverpool was officially founded by King John of England in 1207. For the next 500 years it was never more than a medium-sized town. Nearby Chester was originally England's main port on the Irish Sea. The city slowly took off in the 17th Century, as the silting up of the River Dee made Chester less accessible to ships. This accelerated in the next century due to growing trade, including the slave trade.

But it was the boom of nearby Manchester that spurred on the boom of Liverpool. Manchester became a hub for industry such as textiles, so Liverpool acted as a port where goods made in cities like Manchester could be exported. The world's first intercity passenger railway opened between Liverpool and Manchester in 1830. Liverpool's status as a port made it one of England's most diverse cities, with immigrants arriving from multiple European countries. It also has the oldest Black and Chinese communities in the UK.

Of all migrants, it may well have been the Irish who had the greatest impact. Although very few of Liverpool's modern day inhabitants were actually born in Ireland, many Scousers have Irish ancestry and their legacy has influenced the city's Catholic population and its accent. Liverpool is also the only place in England to have elected an Irish nationalist to Parliament. The city was also once known as the "Capital of North Wales" due to the Welsh who migrated here in the 19th Century. This population has similarly been assimilated. The "Melting Pot" effect means that unlike most cities in Britain, Liverpool is less diverse now than it has been in the past.

In its Glory Days, Liverpool was wealthier than London and the custom house was the largest single contributor of tax money to the government. As you might expect, there have been many innovations here. The city was home to the world's first railway tunnel, integrated sewer system, deep level underground stations, free school meals program, council housing, ambulances, cancer research centre, lending library, arts centre and lifeboat station. The Royal Liver Building on the waterfront was England's tallest building from 1911 to 1961; the Queensway Tunnel was the world's longest underwater tunnel for 24 years. Oriel Chambers is sometimes said to be the first 'modern building', as it pioneered the construction techniques that would be used to build skyscrapers.

From the 1960s until the 1990s, the city was severely affected by industrial decline and often had some of the highest unemployment of anywhere in England. A particular problem was that the move to container shipping took away many jobs at the docks. The low point came with the Toxteth riots in the summer of 1981. There was a political reversal that parelled this; in just over a generation, the city flipped from being England's most right-wing major city to being arguably the most left-wing. The city's economic fortunes have since recovered, especially in the centre. In the first decade of the 21st Century, the city limits' population grew for the first time since the 1920s.

Inhabitants of Liverpool are often called "Scousers". This comes from scouse, a type of stew that was introduced to the city by Nordic traders. The term is not always considered complimentary so be careful if you use it. A more formal term is "Liverpudlians", or more rarely, "Liverpolitans". "Scouse" also refers to the city's distinctive accent. The accent sounds very different to any of the outer places in Lancashire. It is both nasal and guttural, often fast-paced and with rising and falling intonation. The accent has changed much in the last 50 years, and younger speakers may sound noticeably different from the older generations.

No discussion of Liverpool would be complete without mentioning its greatest contribution to modern popular culture: The Beatles. The "Fab Four" were one of several bands to grow out of Liverpool's Merseybeat scene in the 1960s. In later years this connection has been a major draw for tourists. In 2004, UNESCO designated the Liverpool Maritime Mercentile City as being a World Heritage Site.

Besides music, the city is also the busiest filming location in the UK after London, and it has stood in for Chicago, London, Moscow, New York, Paris, Rome... and even Gotham City.

Liverpool faces the River Mersey at the point where it meets the Irish Sea. It is in the ceremonial county of Merseyside, although Merseyside has not had a county-wide council or administration since the 1980s. Until Merseyside was created, Liverpool was solely in Lancashire (but administered separately). It is still treated as being part of Lancashire for some cultural purposes. The Liverpool City Region is a new local government for the region with an elected mayor that is currently being created. The Merseyside and Liverpool City Region areas contain the following council areas:

Liverpool has an airport named Liverpool John Lennon Airport, the first airport in Britain to be named after a person. The larger Manchester Airport is also nearby. Both airports are connected by train to central Liverpool; the former is linked by bus to Liverpool South Parkway station.

Mainline trains run to Liverpool Lime Street station, which is located on the edge of the city centre. Most suburban and commuter trains instead arrive via the Merseyrail network.

The Merseyrail network is a sort of metro network. It has two lines which both have branches. The Northern line actually runs into the southern suburbs as well, while its northern end divides into several branches leading to outlying towns. The Wirral line travels in a clockwise loop around central Liverpool, connecting with the Northern line at Moorfields and Central and with Lime Street in between. It then heads under the river to Birkenhead and splits into two (and then four) branches. It is one of the highest-frequency commuter rail services outside of London. Liverpool Central is also the UK's busiest underground station outside of the capital.

The centres of Liverpool and Birkenhead are connected by the two Mersey tunnels, which both require a toll to cross. There is also a ferry service that runs across the Mersey, made famous by Gerry and the Pacemakers.

Liverpool has two teams in the English Premier League: Liverpool FC and Everton FC. Liverpool play at Anfield in the northeast of the city; Everton play not far away in Goodison Park. Both teams have competed in the top tier of English football since the 1960s. Liverpool have historically been one of the strongest clubs in England, and after a while of being perennial under-achievers, won the European Champions League - widely regarded as the most prestigious trophy in world football after the World Cup - in 2018/19 and stormed to the League title in 2019/2020, racking up 99 points, the second highest total on record (after Manchester City's 100 point season in 2017/18) - and that was even with a three month delay for Covid-19 and a rather lax attitude after the title was won with 7 games to spare. Everton typically appear a short way below the top teams of the league, though they too have undergone a minor renaissance in recent years.

The two teams are fierce rivals, competing in the 'Merseyside Derby'. There was never any real geographic, social or religious reason why some locals supported one team over the other, and fans from the same family may support different teams - indeed, famous players from both sides often grew up supporting the other team. The rivalry is often nicknamed "the friendly derby"; it is one of the few where fan segregation is not enforced. On the pitch it is not so friendly; it has attracted more red cards than any other derby in the Premier League. In any case, in recent years, Liverpool have tended to regard Manchester United as being their primary rivals, a rivalry that is far more vitriolic (literally - in Spain, it is considered the British counterpart of the Barca-Real derby and referred to as 'El Vitriol') owing to the old Manchester-Liverpool rivalry and lack of family ties, though in turn, they've been partially supplanted by Manchester City, the two teams having dominated the league for the last four years (Liverpool fans consider City to be more of a rival, but they hate United much, much more).

Related to both football teams is the fact that you literally cannot give away a cope of The Sun newspaper in Liverpool. People have tried, as part of a social experiment, even suggesting it be used as toilet paper (the memorable response by one passer-by was that they'd rather use a rusty poker). The short version is that it used to be very popular, until the Hillsborough Disaster of 1989, which killed 97 (94 at the time, with three more dying later of related causes, one as recently as 2021) Liverpool fans, including a 10 year old boy - whose cousin, 9 year old Steven Gerrard, went on to become one of the club's greatest captains. While poor policing has been confirmed to have been at fault (an estimated 41 lives could have been saved by better organisation of emergency services), The Sun took enthusiastic part in covering up the failures and dumping blame on the heads of fans with a front-page smear titled 'THE TRUTH', claiming that they had attacked police ministering to the fallen, robbed the dead, and even urinated on the fallen. Suffice it to say, the city was not amused, and the circulation evaporated overnight. Self-serving apologies have been stonily refused, and the paper's name is now usually written as an expletive (e.g. 'S*n') or 'Scum'. It and its journalists are officially banned from Liverpool FC's stadium and facilities - when the club was informed by the FA that the right to host potentially lucrative warm-up matches for Euro 2020 would only be granted if the ban was relaxed, they were turned down flat. As of 2017, Everton have joined this ban, the last straw being a column by the same editor behind the infamous headline that compared Ross Barkley, a midfielder of Nigerian descent, to a gorilla.

The most famous sporting event to take place in Liverpool is the famous Horse Racing event is the Grand National. Actually it's just outside the city limits at Aintree Racecourse. It is a notoriously tough course, with its tricky and unpredictable jumps, some of which are famous in their own right. It is the most widely watched horse race in the UK, and attracts many people who would never watch or bet on horse races at any other time of year.

There are three universities in Liverpool: the University of Liverpool, Liverpool John Moore's University and Liverpool Hope University. The former is one of the "red-brick universities" that were founded in the Victorian era (in fact, it even inspired the term). It also has the best reputation of the three. John Moores is one of several polytechnics that gained university status in the 1992; Hope gained it more recently still. There is also Edge Hill University, which was founded as a teacher training college in Liverpool but has since moved out to the outlying town of Ormskirk.