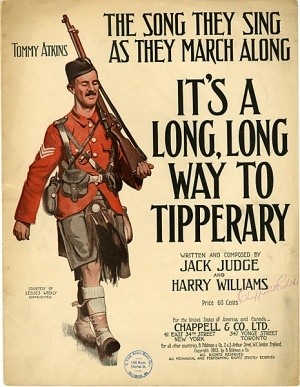 And while we're going there we might as well sing a song about it.
"Welcome, welcome to Moscow! Where faded and fading princesses live..."
— Marya, Natasha, Pierre, and the Great Comet of 1812, "Moscow"
Advertisement:

Some musicians write songs about specific locations. It can be a street, an avenue, a boulevard, a road, a park, a mountainous area, a beach, a town, a city or a country. Most of the times the musician wants to pay Homage to a place that is dear to him. Maybe he grew up there, maybe he still lives there, perhaps he visited the place and was so overwhelmed by it that he wants to pay tribute to it. Or maybe it's the opposite. He wants to criticize the place because he associates it with a certain bad memory, a political system he despises or the mentality of the community who lives there.

In either way, Location Songs will attract attention from people who actually inhabit the place and those who might get curious enough to actually find out more about it and visit it. So it's no surprise that a lot of these songs will actually be used in tourist videos or films and series that take place in the location described in the song.

To many people across the world, it may even be the only thing they know about them. Some people may even be surprised this location actually exists in real life! "Route 66", for instance, a highway between Chicago and L.A. would probaly never have become such an iconic road if it weren't for the fact that Bobby Troup wrote a much Covered Up song about it in 1946, made famous by Nat King Cole.

Note for those who want to add examples: We put everything according to country and alphabetically. Locations that no longer exist are also allowed, as well as instrumentals.

For national anthems, which aren't always about locations, but sometimes more about the nation's founder or the people, see National Anthem.

MOD NOTE: Say no to Zero Context Examples. Do not just list the song name and the name of the band. Explain what the song is about and how it talks about the place.

Democratic Republic of the Congo