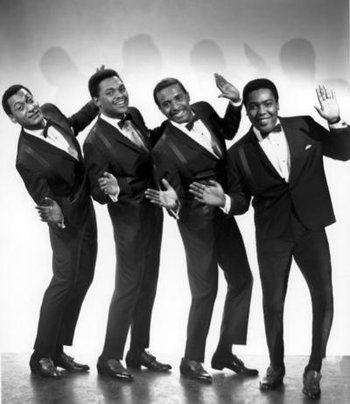 The Four Tops are an American vocal group who came to fame as part of Motown's classic stable of artists in 1960s, originally made up of Levi Stubbs, Renaldo "Obie" Benson, Abdul "Duke" Fakir, and Lawrence Payton. They are notable for their longevity, having been active since 1953, and the stability of their lineup, with the original members performing together until 1997 when Payton passed away.

They got their start touring supper clubs and working as an opening act to more established artists. Once they got signed onto the Motown label, they were used mainly as backup singers and tasked with singing covers of jazz standards. It wasn't until the legendary Holland-Dozier-Holland writing team wrote an instrumental track that they didn't know what to do with that the Four Tops got their chance to shine. The track became "Baby, I Need Your Loving", which established the basis of their trademark pop/R&B sound led by Levi Stubbs' powerful baritone, a rarity at the timenote most male vocal groups were led by tenors.

This was soon followed by a number of commercial hits, including "I Can't Help Myself (Sugar Pie, Honey Bunch)", "It's the Same Old Song", "Something About You", "Shake Me, Wake Me (When It's Over)", and "Loving You Is Sweeter Than Ever". However, they found themselves struggling to continue this success by the 1970s and an attempt to create a Supergroup with The Supremes as the Magnificent Seven resulted in tepid reception.

What followed was a string of label changes and limited chart success, although they were always held in high esteem and cast as tongue-in-cheek rivals to fellow Motown artists The Temptations for battles of the groups in televised Motown specials. By 1980s, the Four Tops shifted focus on touring and performing and slowed their album output.

In 1997, Lawrence Payton passed away due to liver cancer, and the remaining members carried on as The Tops for a short while before recruiting former Temptation Theo Peoples in their first lineup change in 44 years. Since then, Levi Stubbs, and Obie Benson also passed away, leaving Duke Fakir as the only original member of the group.

Stubbs is also remembered for voicing the Man-Eating Plant Audrey II in Little Shop of Horrors.

I Can’t Help Myself, I Love These Tropes And Nobody Else!: