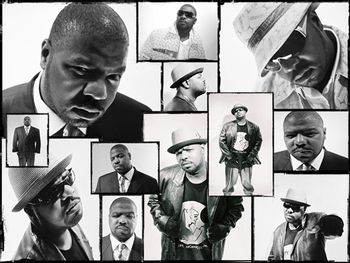 "Sitting down in a crackhouse earning my pay
If some basehead jump crazy, I'll just blow him away."
— From "Esham's Boomin'", the first line on the first song on the first album Esham ever released.
Advertisement:

Detroit rapper Esham (born Esham Attica Smith, September 20, 1973) is known for having a cultish following for featuring rock samples and lyrics about Satanism (early on), drug use, paranoia and hardcore sex, similar to the Geto Boys.

Esham self-released his debut album Boomin' Words from Hell at the age of 13, and later went on to form the independent label Reel Life Productions, and the acid rap group NATAS. His early albums were the subject of much rumor and controversy; local listeners were literally scared of the albums. Albums like Judgement Day and KKKill the Fetus led to Esham being perceived as a Satanist; the latter featured paintings of fetuses on its artwork and lyrics which promoted abortion. After Closed Casket, however, Esham decided to no longer rap about Satan and abandon his use of the stage name "The Unholy".

Esham started beefing with Eminem for no apparent reason (allegedly spurred by Eminem rapping "I think I fucked up my head listening to acid rap" in a freestyle, which Esham took as a diss), and got kicked off of Van's Warped Tour in 2001 after Eminem's group, D12, allegedly beat him up after Esham went on stage and, during his song "Chemical Imbalance", rapped "Hailey's in a coma", referring to Eminem's daughter. After the collapse of Reel Life Productions, Esham found himself homeless and living in his car, and Insane Clown Posse agreed to help him out by again signing him to Psychopathic; Esham also joined the Gangsta Rap supergroup Psychopathic Rydas.

After the solo album A-1 Yola, Esham left Psychopathic to return to RLP. Esham has gravitated back and forth from dissing other rappers for attention and trying to suck up to them, leading to some bad business choices like signing a drug addict "Juggalette" rapper, resulting in him losing the fans that dislike ICP. He's lost even more fans by releasing a series of videos calling ICP's Violent J the devil (Esham called himself "God") and lying about his former business deals with Psychopathic. He later released a video apologizing to Juggalos for his remarks, stating that his perception had been warped by substance abuse, and that he's still a Juggalo and has nothing against ICP or Psychopathic.

. More recently, Esham and ICP resolved their beef, and Esham has made appearances at the Gathering of the Juggalos and on tour with Violent J.

To be fair, it's hard to find a single rapper from Detroit that Esham hasn't had on-again off-again friendships and feuds with. For example, Esham was friends with Kid Rock early in his career, despite the two being extremely competitive, to the point where Kid Rock asked for more money than Esham when they both recorded guest appearances for ICP's Carnival of Carnage. Esham would later diss Kid Rock a few times (even claiming Kid Rock was a racist despite Rock having a half-black son and Esham having his own issues with race), but most recently Esham has spoken positively on Kid Rock, claiming he taught Kid Rock how to rap.